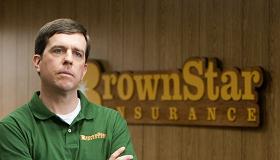 The fantasy of letting loose away from home receives a funny, corn-fed spin in director Miguel Arteta's men-behaving-badly comedy Cedar Rapids. Arteta and screenwriter Phil Johnston tweak the bad boys concept by setting their comedy in the center of flyover land, Cedar Rapids, Iowa, and offering Ed Helms a clever variation on his popular Hangover and Office characters. Adding John C. Reilly and Isiah Whitlock Jr. as fellow agents gives the impression that Cedar Rapids is all about its boys. To the credit of Arteta, the funniest surprise in Cedar Rapids belongs to Anne Heche as Joan, a visiting conventioneer who takes a liking to Lippe. Arteta claims a strong arthouse following, thanks to his films Star Maps, Chuck & Buck and The Good Girl, and is tackling his most mainstream material to date with Cedar Rapids. Still, Arteta's humanistic touch remains evident throughout the film's slapstick. With the likable Helms in the lead, expect Cedar Rapids to quickly become Arteta's top-earner. More importantly, good word of mouth and Helms' fan base look to boost Cedar Rapids earnings alongside past Searchlight comedy hits like Napoleon Dynamite and The Full Monty.

Tim Lippe (Helms) is a shy Wisconsin insurance agent who leaves behind his older girlfriend (Sigourney Weaver) and small-town routine to represent his agency at a convention in Cedar Rapids. Lippe plans to be all business all the time but quick friendships with his laid-back roommate Ronald (Whitlock Jr.), a notorious partier named Dean Ziegler (Reilly) and pretty female agent Joan (Heche), soon land him in unexpected trouble. Lippe wants to follow the orders set out by his boss (Stephen Root) but soon learns that in order to take charge of his life some rules must be broken.

Helms is warm and likable and makes for a great nerd hero with his aw-shucks personality and surprised facial expressions. Reilly delivers another one of his trademark "nutty pal" performances that continue to win him fans. The Wire vet Whitlock Jr. enjoys the best line in the film and shows a real flair for deadpan comedy. Still, Cedar Rapids belongs to Heche, who makes the most of her funniest role to date with plenty of sass and sex appeal.

Phil Johnston, a son of Wisconsin, makes his feature screenwriting debut with Cedar Rapids and it's to his credit that Lippe and his fellow insurance agents come off as fully drawn folks instead of flyover caricatures. The one comic stumble in Cedar Rapids is a wayward subplot involving a corrupt insurance executive (Kurtwood Smith).

Arteta with help of a cinematographer Chuy Chávez, production designer Doug J. Meerdink and costume designer Hope Hanafin, walks the line between ridicule and good-natured ribbing throughout Cedar Rapids and it's to his credit that Tim Lippe, small-town insurance man, turns out to be a hero instead of another slapstick buffoon.