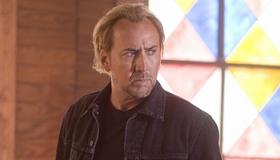 Like a badass out of Hell, Nicolas Cage will be gone, gone, gone back to Hades as soon as he rescues his infant granddaughter from a Satanic cult. Between then and now, however, there's 104 minutes of punching, shooting, stabbing, speeding and full-on silliness in Patrick Lussier's (My Bloody Valentine 3D) latest half-serious homage to pulp. With its deadpan humor and the Daisy Dukes on lead bombshell Amber Heard, Drive Angry is almost as bad as we want it to be, which is to say, it straddles the line between campy and legit without winning over either audience. If teens can sneak in and buy tickets to this R-rated flick, it could make a modest chunk of money before high-tailing it out of theaters.

Cage plays Milton, a dead thug who's been burning in Hell for a decade. Milton is a namby-pamby name for a brute, but any college-educated strays who blunder into the movie know it's an elbow to Paradise Lost poet John Milton, who wrote empathetically of Satan and described the underworld as, "No light, but rather darkness visible served only to discover sights of woe. Regions of sorrow, doleful shades, where peace and rest can never dwell." Lussier spins that into a Hell that hounds Milton with video feeds of the sadness he left behind on earth, tracking his daughter as she fell under the sway of a cult helmed by Jonah King (Billy Burke). It didn't end well. Not only does King carry her femur bone as a pimp cane, he's going to sacrifice her baby—Milton's last living DNA strands—to the devil.

Burke is best known for playing Bella Swan's papa-in-peril in the Twilight franchise, but his cult leader is a giddily nasty piece of work. He's a creep with a soul patch that purrs lines like, "It'd be so easy to shoot you in the throat and watch you gurgle while I eat my morning grapefruit." Milton is the type of role Cage was born to play, but the brawnier Cage gets the more inert he acts, as though his muscles are smothering his emotions. On the sliding scale of Cage crazies, Milton's a middle-of-the-road stoic. He 's got no great quips and he never cracks a smile, but he's funny despite—or because of—his steeliness. In one scene, a honkytonk waitress rides him to a screaming orgasm while he's fully dressed, biting a cigar and motionless. When he rolls over to shoot six bad guys, she's so in thrall the blood doesn't register until he's holstered both of his big guns.

Cage passes the torch to the next generation of scene-chewing actors as he's graciously out-Caged by both Burke and shark-eyed William Fichtner as The Accountant, the ghoul responsible for keeping count of the damned and routing escapees back to Hell. They get most of the laughs, as does a supporting clutter of weirdo, two-scene-only rednecks who get some hysterical lines before they're offed. Amber Heard, a long-legged blonde who could cause whiplash, is there to give the guys something gorgeous to gawk at. Her muscle car-loving waitress isn't much of a character, but Heard is aware enough of her own appeal to give the role exactly what it deserves—she's one starlet who looks natural clawing a guy's face. And she gets the joke. When Heard snarls, "Devil worshipers freak me the fuck out," it's funny because she sounds like every third jerk is a slave to Satan—which, in Lussier's world, is true. (His grand Satanic ceremony looks like a mixed bag of customers at an Oklahoma Burger King.)

The 3D effects aren't quite as awesome as in Lussier's under-appreciated schlock My Bloody Valentine, but the audience is pelted by explosions and shattered jawbones. Lussier gives a couple seconds of lip service to the existential idea that no man can escape his punishment, but he's more interested in scoring Cage's left hooks to the wail of an '80s metal guitar. Heck, given the choice between philosophy and Fender Stratocasters, sometimes you just wanna party.