close
A damaged heroine in a disaster of a film 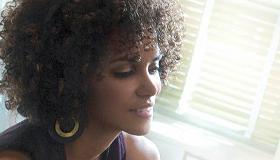 Inspired by a true story, Frankie and Alice is a multiple personality melodrama about a young woman who is literally more than meets the eye. Halle Berry plays both titular characters and is thus afforded what may seem like the quintessential actors' opportunity, that is in fact the quintessential actor's trap. Playing the multiple has been a thankless dramatic endeavor since the landmark 1973 television movie Sybil, starring a post-Flying Nun pre-Norma Rae Sally Field. Everything since that prototypical psycho-drama has been comedy-whether it intended to be or not. Frankie and Alice isn't intended as comedy but is at times hysterical. Nevertheless, Halle Barry won an Oscar (see: Monster's Ball) and is insanely beautiful. Also black women love dramas about black women (see: Tyler Perry movies)-so it opens. Yet word of mouth won't allow theaters to hold it for very long.

Frankie (Berry) is a stripper in what's supposed to be grimy a Los Angeles exotic club, circa 1978. There are no naked women in this club and the music is along the line of Marvin Gaye's "Let's Get it On," which was more sexy than grimy, even in the '70s. Mostly the joint looks like fun. Still, it's meant to establish Frankie as a demeaned and jaded young woman who engages in dubious behavior-stripping, smoking pot and promiscuity. It just happens, 1970s promiscuous black girl wardrobe is fantastic. Fishnet stockings, suede hot pants and sunburst halter-dresses are hot, especially when worn by someone as astoundingly beautiful as the 44-year-old Halle Berry. It also distracts from some of the worst screenwriting that's ever fallen on the ear. There are six credited screenwriters and two story-by credits for a total of eight cooks in the kitchen on this Halle Berry produced vehicle; yet the old adage does apply. This soup could have used a few more cooks. Or maybe this was just a bad idea for a soup and no number of cooks could make it palatable, despite the fact it's inspired by a true story, for whatever that's worth.

As Frankie, Berry is a ghetto girl with an edge, which isn't something Halle Berry has trouble playing (See: Jungle Fever) but even she can't get most of the script's exposition out believably. Disparate editing and flashbacks only make things worse. Alice is one of Frankie's alter egos and she threatens to take over the whole personality condo. She's a sophisticated southern white woman who's both racist and anti-Semitic. The result is accidentally hilarious. As Alice, Berry seems to be channeling Scarlet O'Hara-on crack. There's also a distraught little girl and a guy named Mr. Pete in there; though Mr. Pete may be a different character altogether. The 16-year-old Frankie (Vanessa Morgan) suffered a great trauma worthy of the grandest of black woman melodramas: Imitation of Life, The Color Purple, Waiting to Exhale, and of course, Precious. Years later, Frankie falls under the care of a reclusive research Physiatrist played-for no reason whatsoever-by Stellan Skarsgård. Nothing of any real consequence happens, but Halle Berry is absolutely stunning in every scene.

Sybil can be found on DVD in its original 1:33 aspect ratio.