close
A pass to the bathroom 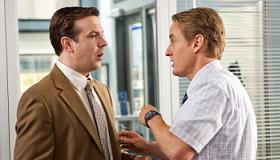 The Farrelly Brothers have never been known for holding back the raunch, but the first half hour of Hall Pass looks like a standard romcom about mid-life marital woes, as two guys with wandering eyes get a seven-day "hall pass" from their wives to sew wild oats. But have no fear, the Farrellys haven't lost their taste for the extreme and there are a handful of tasteless LOL bits that thankfully go way over the top. Receipts for this adult-oriented laffer should be decent, although this hard-R feature will probably only appeal to the older, male, box office set. Once in the theater, women will probably like what they see, too. Still don't expect another There's Something About Mary.

Best buddies Rick (Owen Wilson) and Fred (Jason Sudeikis) are comfortably married with families and good jobs. Still, wives Maggie and Grace (Jenna Fischer and Christina Applegate) feel their unions are in a rut because their guys check out every woman that passes. In order to revitalize their marriages they agree to give the boys a "hall pass," one week of ‘anything goes' vacation from wedded bliss. The Farrellys —directing, producing and writing with Pete Jones and Kevin Barnett —spend a lot of time showing these guys with their friends, pathetically trying to make the best out of their ticket to sexual freedom. Meanwhile, the women find their plan has given them a free pass as well and when the couples visit Cape Cod the ladies inadvertently get extra-marital with two minor league baseball players. Eventually Rick hooks up with an attractive Starbucks barista (Nicky Whelan) but gets more than he bargained for, while the hapless Fred winds up in a compromising position with an older woman (Kristin Carey) and another who gets visibly ill (the film's biggest gross-out moment).

Wilson is nicely restrained as a loving husband caught in a middle-aged crisis, while Sudeikis makes a great foil as a guy in over his head. Fischer and Applegate bring a nice grounded reality to the proceedings, with Applegate particularly fine in her scenes with a much-younger first baseman (played well by buffed Tyler Hoechlin) who gets much further than first base. Among the supporting cast, Richard Jenkins is a standout as the perpetual bachelor who offers bad advice to Rick and Fred, while Australian hottie Whelan makes the most of her "Bo Derek" fantasy-babe role. On the other hand, bits involving Derek Waters as a possessive Starbucks co-worker are played waaaaay too big and let the comedy veer off in the wrong direction.

Ultimately Hall Pass is a film about, for and by middle-aged guys. It is at times riotously raunchy and funny but, for the most part, grounded in a sweet reality. It may not be the peak for the Farrellys but they could—and have—done much worse.