close
Even the title is a plea to the audience

Just Go With It 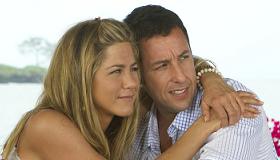 As a title, Just Go with It sounds like a plea to the audience. In the film's simple, if convoluted, love triangle a plastic surgeon convinces his girlfriend that his office assistant is his wife. Some things about the film work: the chemistry between Adam Sandler and Jennifer Aniston, the slapstick gags and delightful supporting turns from Nicole Kidman, Dave Matthews and Nick Swardson. Other parts, however, are dire: the sitcom level (if cruder) humor, the stereotypical, overly precocious movie brats, and the notable lack of chemistry between Sandler and the third corner of the romantic triangle, newcomer Brooklyn Decker. The positives have an edge over the negatives, but it probably doesn't matter either way. It is an Adam Sandler movie. It is a romantic comedy opening Valentine's Day weekend. It is going to be huge.

Danny (Sandler) has a surefire method for picking up chicks. He pretends to be trapped in a bad marriage and women melt, perfect for a one-night stand. Then he falls for schoolteacher Palmer (Decker) who wants nothing to do with a married man and refuses to believe he's getting a divorce until she meets the missus. Against her better judgment, his assistant Katherine (Aniston) agrees to pose as his wife and when she accidentally slips that she has two kids, suddenly Danny has an entire fake family. He whisks all of them, plus his cousin Eddie (Swardson), to Hawaii where Danny is surprised to find his desire for Palmer suddenly competing with his feelings for Katherine.

Just Go with It is a remake of Cactus Flower, Goldie Hawn's 1969 big screen debut and the movie that won her a Best Supporting Actress Oscar and made her a star at 23. Sports Illustrated cover girl Decker, too, is just 23 and making her feature film bow. History will not repeat; the fault isn't Decker's. She is simply saddled with an underwritten and basically insulting role. Hawn's character in the original movie was lively and funny and provided real competition with Ingrid Bergman as the two women dentist Walter Matthau had to choose between. Palmer is warm and pretty, but also woefully immature and there are inferences that she's a little dumb (in her 20s, her favorite reading material is Seventeen magazine and she describes the saddest day of her life as the day 'N Sync broke up). Sharp, funny, wise and hot in her 40s, Katherine outclasses her rival in every way. This may be one of those movies for which the ending is a foregone conclusion, but that's no excuse for how flat and obvious the competition between the women plays out.

That Aniston and Sandler are sweet together somewhat makes up for the movie's flaccid RomCom aspect. Better compensation comes in the form of the supporting cast. Swardson is hilarious as a well-meaning horndog, and Kidman and Matthews are great as Katherine's sorority sister frenemy and sketchy husband. All three of them are scene-stealers, not an easy thing to do with Sandler on the set, and they go a long way toward making a mediocre movie seem much better than it is.