close
When you're a YouTube sensation, what's left to learn? 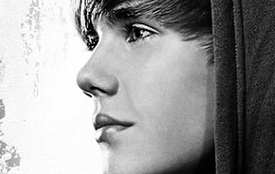 The surprising thing about the new behind-the-scenes documentary Justin Bieber: Never Say Never is that it should have appeal well beyond the star's young, adoring female fan base. The film is a really entertaining look at the Bieber phenomenon; the music in Never Say Never is great and Bieber proves himself to be the real thing as a musician and performer. This 3D film should have fans flocking to theatres on opening weekend, and word of mouth should guarantee a strong box office return perhaps eclipsing similar past music docs about other current teen faves Miley Cyrus and the Jonas Brothers. Profits should be huge when it hits DVD.

The picture, which attempts to be a real inside look at Bieber, his rise and his current fame, revolves around the 2010 tour for his CD and builds with mounting suspense to his performance at New York's Madison Square Garden. Unlike the Cyrus and Jonas films, this one does not aspire to be a filmed concert with a few extras. Perhaps because Bieber is the first YouTube born and bred pop star, footage exists of every point in his young life and career and is used liberally to tell the story of this young, musically gifted Canadian who rocketed to fame with lightning speed. The film opens with those early YouTube postings and cleverly weaves in the Bieber tale with engaging, if carefully chosen, segments tracking his everyday life on the road. Jon Chu smartly directs and uses his experience from Step Up 2: The Streets and Step Up 3D to load this one with energy and style. Cho tries to go beyond the expected concert footage to create a storyline that gets the audience involved in every aspect of the tour and the kid's life, including lots of home movie-style footage. One sequence in which Bieber becomes ill, threatening the whole enterprise, is expertly handled and craftily edited for maximum impact. Of course the show will go on, it always does, but to his credit Chu manages to put some doubt and real-life problems into the mix.

Along the way there are various cameos from Cyrus and Jaden Smith (Bieber performed the song "Never Say Never" with him for the film The Karate Kid) but both get in the way of the real story here. As the film is designed for Bieber's fans, Chu never really gets too far beneath the surface of the real showbiz tale, so family, associates and Bieber manager Scooter Braun all come off like saints. Anything that isn't remotely favorable to the young star and his crew is quickly glossed over, but this film's goal is to be entertaining, not a warts-and-all expose of instant teen stardom. On that level it succeeds beyond expectations.