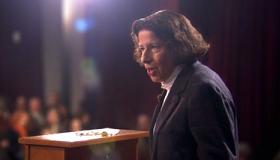 Fran Lebowitz holding forth on sundry topics, most notably herself, would be a treat even without the clean, cogent packaging of a master filmmaker. In his latest documentary, Martin Scorsese doesn't reveal too much about his subject. He leaves us wanting to hear more about, and from, the raspy humorist and gadfly. Not only does his restraint stem from good taste and storytelling savvy, but Scorsese rations Lebowitz lest she come off as someone famous for being famous, a phenomenon she analyzes and, to a degree, exemplifies. Roughly three months after airing on HBO, Public Speaking makes its theatrical debut at Manhattan's Film Forum. New Yorkers will likely turn out in force to honor two of their own—an adopted daughter and a native son.

The question hovering over every second of Public Speaking is whether public intellectuals are now extinct in America. Journalist, essayist, conversationalist and sometime actor Lebowitz may well qualify, combining as she does the satiric scalpel of an H.L. Mencken with the self-referential personality grooming we associate with contemporary celebrity-hood. She can be described as the love child of Mark Twain and Lady Gaga, minus the literary genius of her father and sartorial extravagance of her mother. On second thought, maybe she's the Kardashian sister of letters?

Kidding aside, Lebowitz's intellectual gifts and flair for self-creation are impressive. She's an incisive cultural observer, a polemicist without ideology or cause. Most of all, she's damn funny. Cutting a familiar figure over the last forty-odd years dressed in her trademark men's shirt and blazer, piercing illogical pretensions in her gravelly smoker's voice, Lebowitz is a bit of a throwback but also a trailblazer for every voluble talking head who adds their snarky opinion to the cable TV din nowadays.

Naturally, the movie's title comes from a quip about herself: "When I was a child it was called talking back. Now it's called public speaking." Don't expect Lebowitz to toe any conventional line or pretend to be balanced. "I'm always right because I'm never fair," she observes. And while she's published two books and done her share of journalistic scribbling in Interview and elsewhere, she's arguably best known for her extended writer's block. By her own admission, productivity is not her forte. And because she doesn't own a computer or a cell phone, she's that rare bird—a true Luddite. Forget churning out reams of copy or Tweeting and blogging ad nauseam, Fran Lebowitz is committed to conversation, one-on-one or one-on-thousands.

So it's fitting that the biggest part of Public Speaking consists of her being interviewed at her regular table at the fashionable Greenwich village eatery Waverly Inn, which happens to be owned by Vanity Fair editor Graydon Carter, a producer of the movie. While we don't hear him pose questions, Scorsese sits across the table with another, unidentified man listening and generously reacting to Lebowitz's discourse, filling in movie-related blanks here and there. This monologue is broken up by an eclectic mix of clips, most featuring Lebowitz, many not. We see her wandering her beloved Manhattan on foot, poking her head out of the clock atop Grand Central Terminal, at book signings, lectures and being interviewed on stage by one of her many famous friends, writer Toni Morrison. She's shown on Charlie Rose, Late Night with Conan O'Brien and in one of her recurring spots as a judge on Law & Order. In addition, Scorsese splices in old clips of, for example, Oscar Levant on The Jack Paar Show, Noel Coward arriving at a theatrical premiere, James Baldwin debating racism with William F. Buckley and Buckley and Gore Vidal famously sparring over Vietnam on The Dick Cavett Show.

These figures are germane because they are or were Lebowitz's personal friends, idols or enemies, but more importantly because, Scorsese implies, they represent the type of public intellectual we should understand her to be. As for her gripes, the list of topics she hilariously inveighs against includes baby strollers, smoking bans, the idiocy of racism and the (to her) inexplicable desire of gays to get married and serve in the military. She offers an ode to the scuzzieness of Times Square before it became a sanitized tourist Mecca, and to living in New York when it was affordable; and she voices her admiration for James Thurber, Dorothy Parker and the Algonquin circle of wits, to whom she serves as a natural link.

Her private life remains off limits. You get the impression that while probably gay she's too busy talking to have sex. Or maybe, talking is better than sex for Lebowitz. Three tidbits we do learn: her childhood idol was cellist Pablo Casals, she owns a white (make that pearl gray) checker cab and she's been a category on Jeopardy. Among the more memorable bons mots that tumble out: "I believe in talking behind people's backs. That way they hear it more than once."

The serious take-away from Public Speaking is that Lebowitz is proud to be an elitist. When it comes to cultural matters, she believes there's too much democracy. Not only do we need an "aristocracy of talent," she offers this succinct ode to connoisseurship: "Discerning audiences are as important to culture as artists." It's no wonder, then, that a wistful tone occasionally creeps into Lebowitz's musings and the movie as a whole. But rather than let a dearth of talent on both sides of the artist-audience equation get her down, Lebowitz has resisted becoming a full-blown curmudgeon. The pleasure she takes in making others laugh by being caustic proves she's no misanthrope or killjoy.