close
In scuba gear, no one can hear you scream 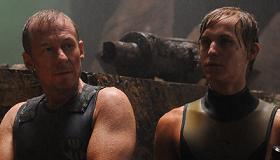 Those Friday the 13th campers have it easy. They're just in the woods. Sanctum's spelunkers-in-peril are in the woods...in Papua New Guinea...in a watery cave so fathomless they haven't seen sunlight in 17 days. "There's no god here," barks head explorer Frank (Richard Roxburgh) in a performance tough enough to chew stalactites. But there's plenty of atmosphere and awe, even if it's in the service of a story that starts rote and finds its sea legs only when half the divers have sunk their bones to Davy Jones. James Cameron's name on the credits should guarantee that the $30 million dollar thriller will make a decent splash even if it has to dogpaddle for foreign sales to make back more than its budget.

Like The Descent, Sanctum tracks a group of people each tough and smart enough to be the survivor among a lesser cast of living corpses. Leader Frank, his estranged teen son Josh (Rhys Wakefield), millionaire investor Carl (Ioan Gruffudd) and his spunky girlfriend Victoria (Alice Parkinson) all know their way around climbing ropes and oxygen tanks. So, too, do the rest of the team. But when a storm floods the cave and blocks all charted exits, die most of them must. And though we can blame audience blood lust, or even writers John Garvin and Andrew Wight (who lived through a light version of this tombed terror), these fighters point their fingers at Frank.

There's a chill at the movie's core that's as cold as the cave. Roxburgh's team captain, the most famous explorer of the day, is a composite of Sir Ernest Shackleton and Ayn Rand. He's in the service of history, and while he won't drown someone for his quest, he won't cry long if they accidentally drown themselves. "They knew the risks!" he grunts. And they do—in one scene a team member deliberately drowns so he won't slow the gang down. But while Frank's at first a ruthless foil for son Josh's playful athleticism, director Alister Grierson eventually recognizes his nobility and the father-son sniping warms into a stirring mutual respect; it's good, strong schlock, and it works in harmony with the cavers' harrowing struggle.

The last 30 minutes are primevally claustrophobic—the 3D is functional enough to get your pulse up, even if the shapes are a bit flat. (And in case you were steeling yourself for a "shocking" twist, thankfully no monsters slither up to spoil Grierson's efficient tension.) He's doing well enough doling out nasty slips and suffocating scuba sequences. Sanctum is a fine way to waste a Friday, and frightening enough to steer you away from spelunking in an underwater cave in the forests of Papua New Guinea. For the bold who see it as a travelogue, be warned: Roxburgh might say it's "his church," but the high tides demand a high tithe.