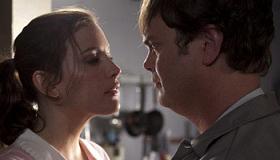 Now that we're burning through the all-American superhero, the teenage superhero and the brooding superhero, the march of the potbellied, under-qualified superhero has begun. These wannabe cult characters, and the wannabe cult movies about them, are being peddled as transgressive responses to the mega-budget comic book fantasies upon which the big studios are dependent. Special and Defendor are two recent (and well done) examples of turning crime fighting conventions on their cowled heads. Super, in which Rainn Wilson plays a doughy, gawky cook who becomes the doughy, gawky Crimson Bolt to rescue his wife from drug dealers, has more on its mind. Too much, as it turns out, for writer/director James Gunn to distill into a cohesive, focused piece. Here, the comedy works at cross-purposes with the dramatic intent and the promising themes. The result contains more tones than a Sherwin-Williams swatch book. Still, this depraved charmer offers enough to admire and a specialized hipster crowd will enjoy it, if to a mutedly positive effect.

With invincibility, adulation and leaden earnestness, superheroes hide a serious savior complex. Gunn deserves credit for developing this concept until it becomes a source of laughs and, paradoxically, a pro-religious statement. Frank D'Arbo (Wilson) is an everyday schmo given to prayer and known to have visions. When his wife, a former addict named Sarah (Liv Tyler), falls into the clutches of volatile drug kingpin Jacques (Kevin Bacon), Frank is devastated. Marrying Sarah was one of the two most perfect days of his life. The other was foiling a robbery, giving him what all superheroes need: a damsel to save and a desire to right wrongs. After watching the cheesy exploits of the Holy Avenger (Nathan Fillion) on the All Jesus Network, Frank has a vision of being touched by the finger of God. Inspired, he becomes the Crimson Bolt, vowing to fight crime and rescue Sarah, all while wearing a homemade red costume.

Gunn came through the Troma system and he's ported that sensibility to Super. That's a good thing from scene to scene; it's more troubling when considering the film as a whole. There are sudden, shocking acts of brutality, which give the violence a street-toughened realism. With his hilarious rallying cry, "Shut up, crime!", Crimson Bolt hits the streets with a pipe wrench and starts pummeling smalltime drug dealers as well as miscreants representing those who wronged him during his humiliating childhood. Had Gunn been satisfied playing in this particular sandbox, he'd have an unqualified winner. Especially because Wilson has, how shall we say this, a very specific face that has a tough time lending itself to non-comedic roles. He gives a hard working performance, for sure, and as the movie edges from oddball comedy into something darker, you sense he's upping his game. What he can't overcome, nor can Gunn, is a disconnect between the comedy and the drama that gets more pronounced as Super progresses. The film's high point is the final siege of Jacques' compound to rescue Sarah. It's a riveting sequence that opens with "biff pow" graphics that might represent the ultimate melding of Frank's real and fantasy lives, but it's still reaching for a laugh where a laugh doesn't belong. And that's to say nothing of what follows, a play for the heartstrings that feels tacked on after 90 minutes of gleeful, audience-baiting amorality.

Gunn does cross into some bold territory, at least for this genre, when he notes the fetishistic quality of superhero fan culture. It's always been hiding in plain sight, but it comes fully to life in the film's best character, played by Ellen Page. She's Libby, a comic book clerk who becomes Crimson Bolt's sidekick, Boltie. Initially, she's just helping a weird stranger shop for comic books. Later, as Crimson Bolt wields his mighty cinder block and becomes the latest cause celeb on the local news, she puts two and two together. Eventually, through pure badgering, she becomes Crimson Bolt's partner. Her cheesecake poses while showing off her costume and her sexual interest in Crimson Bolt (as opposed to Frank) is a remarkable acknowledgement of the underside of comic book allure. Such a clearly psychotic character also allows Gunn to explore the thrill-kill vigilantism that would likely result if the world were actually inundated with DIY superheroes. Beating up the guy who "may have" keyed your friend's car would happen constantly if the only requirements for superheroism were a sewing machine and a mental disorder.

So Super is not wanting for good ideas; it's wanting for direction. Gunn does make the low budget work in his favor. The muddy photography helps with realism and the performers are committed. The Tyler Bates score is a plus and there's enough comedic edge to satisfy those who enjoy the sight of vomit swimming around a toilet until it forms into an image of Liv Tyler's face. Most importantly, its psychosexual and religion overtones break it from the pack. But when all you'll remember is the self-congratulatory archness that's the default attitude for these types of films, well, that's not so super.