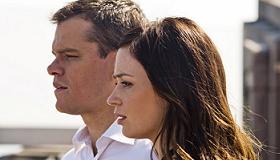 Fate wears a suit and hat, professional garb for those who come between a disgraced politician and the woman he loves in this stylish adaptation of Philip K. Dick's Cold War era short story "The Adjustment Team." Dick's spare tale of a man who gets an accidental peek at the workings of destiny has been expanded into both a romance and a thriller, a vehicle that reunites Matt Damon with Ocean's Twelve and The Bourne Ultimatum screenwriter George Nolfi, and allows the actor to work his considerable charm. Nolfi makes a memorable directing debut in this sometimes silly, but also suspenseful and entertaining story. Whether it will find traction at the box office is another matter. The sci-fi elements make it a hard sell for the romance fans that are the film's primary audience. Even with the likeable Damon front and center, it is questionable whether it will earn back its reported $51 million budget.

The simple realtor from Dick's story morphs into failed U.S. Senate candidate David Norris (Damon) for the film. The night of his electoral shellacking he's charmed to meet dancer Elise Sellas (Emily Blunt). Riding the bus on his first day in his new job, he runs into her again and it seems as if fate is bringing them together. In reality, Fate—in the form of The Adjustment Bureau's Harry Mitchell (Anthony Mackie)—is charged with keeping them apart. The meeting is a mistake and so is David's late arrival at the office, the timing offering him a glance at something entirely forbidden. For Harry, Harry's boss Richardson (John Slattery) and the Bureau's big cheese Thompson (Terence Stamp), David is a problem, particularly when he pursues a relationship with Elise, an unwitting rebellion against his destiny.

The men of the Adjustment Bureau resemble the otherworldly evacuation team of Michael and Mark Polish's Northfork: apparently celestial beings attired in Brooks Brothers' suits. Mackie brings enormous empathy to his role as the one member of the Bureau who sees David as more than an element out of alignment. Slattery adds humor, his acerbic wit underlining the cynicism of a pragmatist who's seen it all and just wants to get the job back on track. The Adjustment Bureau follows absurd rules involving water, hats and doorways, but it is those rules more than anything else that allows the movie to morph into an action thriller in its final act. New York has been the scene of many movie chases, but none quite like what transpires here. This is a film that uses its location well, transforming the city and its familiar locations into something enigmatic and surreal.

The action, fantasy and suspense elements are all highly enjoyable, but if the romance didn't work this movie would fall apart. In a way, David and Elise are a kind of modern-day Romeo and Juliet. There may be no warring families, but there is a conspiracy to keep them apart. In Damon and Blunt, Nolfi has cast the right star-crossed lovers; the chemistry between them is apparent from their first meeting and only grows from there. This is Damon's first truly romantic lead role and it suits him.