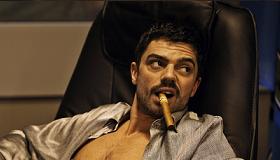 Director Lee Tamahori first appeared at the Sundance Film Festival with Once Were Warriors, the tale of a troubled Maori family. Fifteen years later he returned to Park City with The Devil's Double, about the relationship between Saddam Hussein's mad son Uday and his furious lookalike. "I've found another dysfunctional family in Iraq," Tamahori laughed from the stage of the Eccles Theater as he introduced the film. In keeping with the flamboyant clan of despots that were the Husseins, the drama is ultraviolent and over the top and made absolutely mesmerizing by Dominic Cooper's electrifying turn in both roles. Lionsgate acquired the film out of Sundace, betting on Cooper's performance and lingering interest in the Husseins to pull in fans of both character-driven and historical fare.

In the midst of the Iran-Iraa war, soldier Latif Yahia (Cooper) knows something is up when he's pulled away from the battlefield and shuttled to one of Iraq's palaces, the atmosphere growing more ominous when manic Uday Hussein enters the room, recalling their former friendship. "We were classmates," Latif reminds him dourly, but reminiscence is not what Uday really has in mind. His father Saddam has a "fiday," or double. Stalin had one and so did the Shah of Iran, and now Uday wants one of his own. Latif, with his strong resemblance to Uday, is the one for the job. Coming across like a crazed, Iraqi Don Corleone, Uday makes an offer Latif can't refuse—not if he wants his family to live.

The gilded cage has its perks: fine clothes, sports cars, a Rolex and any woman that Uday doesn't claim as his own. But creature comforts mean nothing to an upstanding man like Latif, particularly as he becomes a helpless witness to Uday's monstrous behavior. For this predator who takes what he wants, rape is a hobby and murder is a sport. Coked out of what passes for his mind, no one—not his father, his number one mistress Sarrab (Ludivine Sagnier), his handlers or even Latif—can control his behavior. At least it makes it easier for everyone around them to tell which is which when Latif is in Uday mode. "For one thing, he's sober. For another, he's not foaming at the mouth," Uday's younger brother Qusay (Jamie Harding) says in explaining how to tell when it's Latif taking Uday's place.

Tamahori's drama is as elegant as it is flamboyant, beautifully designed and gorgeously shot by cinematographer Sam McCurdy. And while Christian Henson provides a fine original score, the music that drives the film is disco, Dead or Alive's "You Spin Me Around (Like a Record)" and Frankie Goes to Hollywood's iconic anthem "Relax." The emphasis is on the decadence of the Hussein regime, opulence at the expense of everyday Iraqis. For the completely amoral, it is an attractive life of excess, albeit one with occasional assassination attempts. Latif, whose moods swing from anger to depression to complete disgust, can never see it that way. Even if he could get with the program, as the double, he is the one on the receiving end of those assassination attempts and he has to live with the knowledge that Sarrab makes explicit, that sooner or later Uday will get tired of the man he constantly refers to as his "brother" and that will be the end of Latif.

Cooper's charisma has been evident to anyone who saw him on stage or screen as the seductive Dakin in The History Boys, or in supporting turns in movies like The Duchess, An Education and Tamara Drewe. He might have skated by in The Devil's Double on charisma alone, but instead he digs deep to deliver what are essentially three complex performances: here he plays Uday, Latif and Latif impersonating Uday. The danger, which Tamahori pointed out during his Q&A at Sundance, is that Uday cuts such a striking, colorful figure that he could overwhelm the quiet, watchful Latif. That fact this doesn't happen is a credit to an actor who knows how to command the screen whether his character is wildly out of control or silently simmering. Sam Rockwell in Moon and Armie Hammer in The Social Network have also delivered impressive double acts in the last couple of years, but Cooper is even better, giving movie fans with no interest in Uday Hussein, his crimes or his victims, reason to spend time with The Devil's Double.