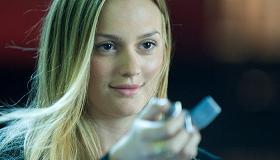 The Roommate is set at the fictional ULA-University of Los Angeles. A more appropriate name for the institution might be The University of Lame Ass movies. Yep. That's the best I could come up with, but I'd argue it's a testament to the film's contagious lack of imagination rather than to my own shortcomings. What's most memorable about this plodding thriller are the copious amounts of foundation and lip gloss. The cost of Leighton Meester's make-up supply alone probably dwarfs the budget of many an indie. Ditto the sepia filters used to create a fashion-shoot noir atmosphere. Naturally, none of this will stop The Roommate from attracting a sizeable cross-section of moviegoers this weekend, before being discarded like last season's chic accessory.

Sara Matthews (Meister) has come to ULA from Des Moines (not, despite appearances, from Manhattan's swankier precincts) to pursue her dream of becoming a fashion designer. Sharing her dorm room is local rich girl Rebecca (Mika Kelly), a quiet mannequin who aspires to be an artist and, more urgently, Sara's best friend. Without dallying, Rebecca tries to fill the void left by Sara's deceased older sister.

Her first order of business is to scare off the floor floozy Tracy (Aly Michalka), who pays for her slatternly ways in a tense shower scene (arguably the pic's best). Next, Rebecca targets Sara's randy Intro to Design professor (Bill Zane) and then it's on to her ex from high school, her current frat-boy squeeze (Cam Gigandet) and finally Irene (Danneel Harris), a Sapphic seamstress Sara knows from back home in Iowa. Oh, I almost forgot the little black kitten clueless Sara adopts. "Cuddles" meets a grisly end in the laundry room. Alas, the power of the SPCA ensures we don't get any visual payoff from this predictable incident.

Dimension and subtext are largely absent from Sonny Mallhi's screenplay and, under director Christian E. Christiansen's guidance, Meister and Kelly can't dig their polished nails into any faintly visible nuance. The most exculpatory thing one can suggest about the static filmmaking is that Christiansen and company felt constrained by the PG-13 rating, even if there's scant evidence a more explicit picture would be significantly less monotonous.

By setting a contrasting tone, the soundtrack's syrupy pop songs certainly fail to turn up the heat. Rebecca's feverish behavior resembles the actions of a boutique Barbie more than it does the fiendish plotting of Jennifer Jason Leigh's Hedy in Single White Female. When it comes to exploitation and cheap thrills, maybe screen chicks haven't come as far as we thought. According to Zane's pervy instructor, Sara has two things he can't teach, "Style and desire." If The Roommate's idea of both were less plastic, it might not play like such a bad knock-off.