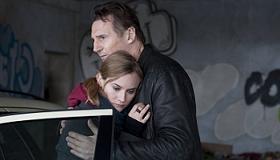 Liam Neeson plays a man who has it all, including rotten luck. The debonair scientist has just arrived in Berlin for a genetics seminar at a posh hotel where he and his young wife (January Jones) will hob nob with Saudi princes and change the future of the world. But a missing briefcase begets a taxi crash begets a four day coma, and when Neeson comes to, another man (Aidan Quinn) has stepped into his life down to the smallest detail: name, wife, career, passport and headshot on his webpage. Oh, and since it's Thanksgiving, the American Embassy is closed and none of his few friends are answering the phone. Jaume Collet-Serra's tidy, moody thriller ticks along at a fast pace—like the Autobahn, it's pure Teutonic efficiency. The last time Neeson smashed up Europe in 2010's Taken, he made $145 million at the domestic box office. Warner Bros. might not get those numbers, but they aren't crazy for crossing their fingers.

First, let's have an anti-anti-spoiler: Neeson isn't dead. Whew. Now you're free to enjoy watching him batter the mystery into submission without worrying about a Sixth Sense suckerpunch. Unknown can be taken at face value—at least, as much as you can trust a guy with a head wound and a heap of paranoia. Neeson's late-career renaissance as an action hero makes sense when seen in motion. The 58-year-old actor has a former boxer's solidity and the seen-it-all nobility of a man who would die for the right cause. He's also the only actor in Hollywood who could look equally natural explaining molecular genetics, ordering tapas, garroting a creep and squiring a wife half his age.

The great weakness of Unknown is that the wife is January Jones, whose character is the pivot point in solving the whodunnit (and whydunnit). With a husband on both elbows pressing her to tell them what they want, and secret threats pulling her strings, a good actress would have seduced us into believing the wife's every word, even when we know they can't add up. But Jones delivers her line readings so robotically that even her truths sound like lies. She's got the look of a Hitchcock blonde, and the movements of a deer in the headlights. Even her kisses look fake.

Her miscasting keeps Unknown from being great. But there are plenty of add-ons that make it good enough, like a smashing tin can taxi chase and a replacement blonde in Diane Krueger, playing the taxi driver roped into helping Neeson. (Though the movie fumbles by hiring the most recognizable German actress in Hollywood to play an illegal non-German immigrant, and expecting us to know that long before it tells us.) The bad guys are all terribly, thrillingly brutal, which is all I'll say about them. And Bruno Ganz, the actor most famous for playing Hitler in Downfall and a flurry of YouTube videos, has a fine turn as an ex-Stasi officer Neeson enlists in his cause. "We Germans are excellent at forgetting," Ganz purrs. Us Americans, too, except we forget that we forgot.