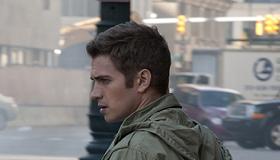 Vanishing on 7th Street begins with a classic and tense setup. Paul (John Leguizamo), a projectionist in an old movie house, oversees a horror movie playing in a packed and darkened theater. After a momentary power outage he finds the entire theater empty; several toppled popcorn tubs and piles of clothes remain where people once sat. Rosemary (Thandie Newton), a hospital worker, frantically runs through the empty building screaming for someone—anyone. What she finds is equally disturbing. Luke (Hayden Christensen), a young reporter, takes a little longer to notice that the city is empty—relatively speaking. This is all fodder for a promising film review. The review gets better, the movie doesn't. By the third act, what ought to have been a taut sci-fi mystery or thriller (or even a decent psychological horror flick), is instead a pretentious existential thriller about being afraid of darkness, both external and internal. The dark is not threatening, and metaphorical darkness is even less so; as a result this movie is not particularly scary. Thus the promise of its opening wears off as the film wears on, and this pattern will likely be matched at the box office.

Before long, Paul, Rosemary and Luke wind up in a local bar where they find a resourceful 12-year-old named James (Jacob Latimore), waiting diligently for his mother to return. By the time we get all the principles in place (which takes about 14 minutes) the audience knows this: darkness is literally the enemy, and light is the only thing that will keep you safe. If you're thinking you know this plot device you certainly do, but being derivative is no crime in filmmaking. Not putting old ideas to new use is slightly criminal and certainly boring. For the next 80 or so minutes, we endure the requisite personal story monologues, each intended to invest us in the characters emotionally. They don't. They're just irritating and they made me hope everyone in the film would hurry up and turn into a pile of clothing.

Detroit is the setting of Vanishing on 7th Street, an eerie choice since the devastating worldwide financial crisis has transformed the streets of Detroit into blocks and blocks of empty and rundown buildings. This real desolation does offer a stunning backdrop for a movie about a barren city. Convenience and tax breaks are perfectly good reasons to set a film in a particular place, but the actual emptiness of a city like Detroit lends itself to an exploration bigger than cool shots of vacant cityscapes and low permit fees. Director Brad Anderson (Session 9, The Machinist) is usually very astute about these things, but in ignoring the real-world threat of urban blight he also ignored an opportunity to make this movie something relevant and current. But that, perhaps, would have been a different movie altogether. At a loss for a stronger reason to exist, Vanishing on 7th Street spends a lot of time trying to convince us that it's thrilling, even while it's just sitting there in the dark, waiting for a good place to fade to black.