close
Meet my stalker—ain't he a charmer? 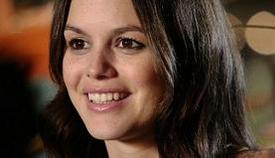 A refreshingly pure, honest and original love story, Waiting For Forever is one from the heart with superb performances from a talented cast. A story about a down-on-her-luck TV actress who visits her ailing dad and finds herself romantically pursued by her childhood friend, Waiting for Forever is a well-made independent drama that will depend on strong word of mouth to overcome its low budget and lack of star names. A Freestyle release, box office prospects could be bright if the right audience is aware of it, but without such attention DVD prospects are its most likely venue for recoupment.

In today's cutthroat world of theatrical distribution, a small movie that sports no real exploitative elements except genuine human interactions is a tough sell. This one deserves its day in the sun. Young actress Emma (Rachel Bilson) is suffering the after-effects of a difficult love life and a failed TV series when she decides to return home to spend time with her ailing father (Richard Jenkins). Although she lost touch with her childhood best friend Will (Tom Sturridge) long ago, he never forgot her and continues to follow her even as he maintains his "career" as a juggler. While Emma is bitten by the harsh realities of life, the ever-idealistic Will is an eternal optimist. Having lost both his parents in an accident when he was only ten, the childlike Will has never emotionally grown up, but he's innocent rather than disturbed, a true believer rather than a stalker. How refreshing to see this movie doesn't drift into stereotypical areas similar flicks have, but instead keeps the focus on ideas and the harsh divide between the realities of life and the frustrations that remind you things could be so much more. Of course there are complications and at some points the film gets a little melodramatic, but it is such an endearing group of characters we forgive any trespasses.

Neatly alternating between the Emma and Will scenario and the solid and heartbreaking union of her dying father and compassionate mother Miranda (Blythe Danner), director James Keach keeps the tone of Steve Adams' screenplay right on track without losing sight this is a multi-generational love story at heart.

Performances by a fine ensemble of actors keep us glued to the screen. Jenkins stands out in a wryly funny and moving turn as a very strong husband and father who calls the shots as he sees them. Danner is warm and winning as his wife who is doing her own emotional juggling act. Both are absolutely first rate and wonderful together. In the leads, Bilson, who first broke through as Summer on the long-running series, The O.C., is a promising new movie find, while Sturridge manages to keep us rooting for him without ever believing he's some sort of underdeveloped emotional loser, which is no easy task.