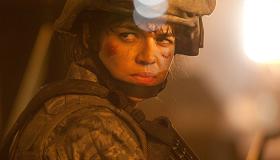 For the second time in less than six months, seemingly invincible aliens invade Los Angeles, but while the lightly budgeted Skyline focused on a handful of civilians stranded in an apartment complex, Battle: Los Angeles (BLA), boasting a budget to support lots of explosions, spotlights the heroism of a group of scrappy Marines. BLA does have one other thing in common with Skyline besides location: it presents an apocalyptic scenario that ought to be tense and horrifying but is instead unintentionally funny. The movie's true horror isn't the murderous extraterrestrials, but the lame script. Mixing and matching elements of sci-fi, action and war drama, it has enough going on that it ought to attract a sizeable audience despite its shortcomings.

Initially mistaken for meteors, the aliens arrive simultaneously in different port cities throughout the world and quickly establish their dominance. Staff Sgt. Michael Nantz (Aaron Eckhart), 2nd Lt. William Martinez (Ramon Rodriguez) and the rest of their unit are sent to rescue civilians trapped in a Santa Monica police station. On foot behind enemy lines, the Marines are a moving target against an overwhelmingly superior force, but remain determined to complete their mission.

The alien plot puts this film in the science fiction genre, but really BLA is organized like any war movie in which soldiers come together to survive. Alien enemies provide us more ruthless villains with greater firepower, yet it's hard to get worked up over so many CGI creatures. They don't speak, they don't even have real faces and they are identical. They're objective isn't even very interesting. They don't want world domination; they want the world's water, and their reasons are never explained.

What's worse is the Marines don't have much more personality than their faceless enemies. Nantz, the grizzled 20-year veteran who just filed for retirement and bears the guilt of being one of few survivors from a previous battle assignment, is about the only one we could pick out of lineup; worth mentioning he's played by Eckart, one of few recognizable names in the cast. The characters are a collection of war movie stereotypes spouting war movie clichés. The dialogue is flat out ludicrous. When Nantz, for example, comforts a young boy who's just lost his dad, he mutters, "Be my little Marine," a moment that ought to be heart tugging instead incites laughter with its sheer stupidity.

Finally, if a movie is entitled Battle: Los Angeles, an audience is within reason to expect to see some recognizable landmarks take a hit. Maybe see the Hollywood sign missing a few letters, or Disney Hall in flames, or the Capital Records building partially in rubble, anything to indicate that, yes, this is Los Angeles and it is under siege. Those familiar sights are absent in the movie, one more critical lapse. This film reportedly cost $100 million to make, most of it apparently spent on CGI and blowing stuff up; it certainly wasn't money invested in attention to detail or a decent script.