close
Beauty and the Bro 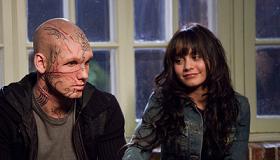 When Alex Pettyfer, a male ingénue positioned as Hollywood's latest Next Big Thing, popped up onscreen doing pushups over the opening credits, the theater exploded in hoots from high school girls and sarcastic whoops from their imperiled boyfriends. Not to worry, fellas. By the end of act one in this kiddie Beauty and the Beast, a witch (Mary-Kate Olsen) has turned the bronze god into a gargoyle. Bald, tattooed, scarred and sewn up with what looks like liquid mercury (at least he's still got the bitchin' bod), Pettyfer must win the hearts of both Vanessa Hudgens (High School Musical) and the same ticket-buying teen audience that largely ignored his recent I Am Number Four. The first is certain, the second not-so-much, but the surprise is that this long-delayed CBS Films release is funnier, sharper and sweeter than expected—at least good enough to meet its low expectations.

Kyle (Pettyfer) is a snide prep school student who we meet running for President of the Green Club, an environmental group that, on this Manhattan campus, stirs up the same passion as the Nuremburg Rally. Tellingly, the classmates cheering for his election wave placards of his perfectly square-jawed face, not of his slogans. This is fine by him: "Beautiful people got it better," he speechifies to the crowd. He's so confident his supporters don't give a damn, he fesses up that he's only in the race to burnish his college applications. Cocksure of his coming landslide, he doesn't even delete "No fatties" from his Facebook profile.

Do the beautiful have it better? Well, probably. Writer-director Daniel Barnz doesn't prove otherwise. The best he can offer is faith that a good personality—or at least, a less-toxic one—can, on rare occasion, even the score. But it's the cynicism, not the phoned-in uplift that works in this junior varsity Grand Guignol.

Teens convinced that a pimple will kill their social life will find Beastly bracingly honest. They know that Pettyfer's news anchor dad (Peter Krause) is a jerk for saying, "People like people who look good. Anyone who says otherwise is either dumb or ugly." But that's also what their insecurities warn them on a Friday night. The concept is hot-blooded nonsense, as are the contrivances needed to trap sweet young thang Vanessa Hudgens in Pettyfer's Manhattan mansion (the French fairytale writers didn't have to work around cell phones and statutory kidnapping), but to Barnz's credit, he's trying to tell kids that he gets their pressures—and more, that their pressures are real. Instead of selling that same old schlock that beauty is within, he splices in billboards of model-perfect bodies that cast shadows of judgment over Times Square.

But the big romance is more cute than combustible. For a high school stud living with his crush, Pettyfer's testosterone is kept in check for swoony preteen girls. Once clued into the fact that he's got to be nice, he'd rather build Hudgens a greenhouse than get in her pants. The last third plays like it's on fast-forward, restless for the big kiss; we're skimped on the love story, but given plenty of comic relief from Neil Patrick Harris' blind tutor who lounges around the estate wearing sharp suits and cracking snide jokes. He's having fun. And if you're not? As Pettyfer says, "Que sera sera-Spanish for, it sucks to be you."