close
Punchlines and pathos from the lady set 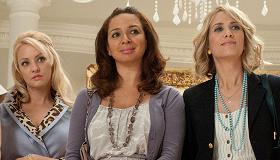 Co-written by and starring the most on-the-verge comedienne in Hollywood, Kristen Wiig, Bridesmaids is a breakthrough comedy, a four-square piece of populist fun that ranks as quite possibly the best mainstream American comedy in years—at least since The 40-Year-Old Virgin. Wiig is a force of nature all to herself, but surrounded by five really well-cast comediennes, Bridesmaids boasts one of the most eclectic and cliché-free ensembles in any modern female-driven film. The cast's collective efforts easily transcend conventional chick-flick camaraderie, which is terrific news for the film's marketing team and the male viewers they hope to entice. Expect critical adulation and brilliant box office prospects.

Evidenced by her latest film, Wiig has become the new Steve Carell: after not-so-quietly stealing scenes in all manner of small and big-screen projects, she finally enjoys a leading role (as Carell did with The 40-Year-Old Virgin) that showcases both her undeniable comic sensibility and her mettle as a dramatic actor. Not only starring in the film but writing and co-producing it, Wiig is both a brilliant self-starter and a shrewd collaborator, showcasing her own considerable talents while simultaneously creating great opportunities for her co-stars, creating material that is equally transgressive and entertaining.

Wiig plays Annie, a former cake connoisseur who is working at a jewelry store after her own business, Cake Baby, went under. With only her best friend Lillian (Maya Rudolph), her mother (the late Jill Clayburgh) and her callous fuck buddy (Jon Hamm) to confide in, she struggles to eke out a meager and largely miserable living. But when Lillian announces that she's marrying her longtime boyfriend, Annie unexpectedly finds herself with four new friends: Disney-obsessed newlywed Becca (Ellie Kemper), jaded mother and housewife Rita (Wendi McLendon-Covey), fearlessly crass government employee Megan (Melissa McCarthy) and polished perfectionist Helen (Rose Byrne), whom Annie soon discovers is intent on stealing away Lillian as her best friend.

Much like Virgin, and almost all Apatow-adjacent projects, Bridesmaids has a certain formlessness that feels less like a driving narrative than a series of escalating comic set pieces. But one supposes that the "and then this happens" storytelling style has become de rigueur for contemporary comedies, which continues to be emotionally effective, especially (in this case) with a central story that is not just cohesive but which exudes confidence, even when its heroine doesn't. The wild flourishes that are hallmarks of her SNL characters are interjected subtly into otherwise mundane situations, creating a cinematic world that is defined by sincere feeling rather than go-for-broke silliness.

At the same time, there are some truly spectacular gags in the film, including quite possibly the cleanest scatological payoff in R-rated comedy history. Wiig is a force of nature all to herself, but surrounded by five really effectively-cast comediennes, Bridesmaids boasts one of the most eclectic and cliché-free ensembles in almost any modern female-driven film. Between Wiig and Rudolph's irreverent, sentence-finishing besties, McLendon-Covey's exasperated, potty-mouthed (at least borderline) alcoholic, Kemper's naïve Disneyphile, and McCarthy's female equivalent of an ‘80s-era Curtis Armstrong character, their collective efforts easily transcend conventional chick-flick camaraderie - which, suffice it to say is terrific news for both the film's marketing team and the male viewers they hope to entice. Not to mention that it's also some of the single best evidence I've recently seen that audiences can relate to well-crafted characters no matter what their age, color, or yes, gender.

The script, by Wiig and Annie Mumulo, avoids the female relationship dynamics typically depicted in movies; Annie's competition with Helen notwithstanding, the backstabbing, insecurity and jealousy all comes from such a generalized place that it never feels like "women's issues." This might be because, for all intents and purposes, Wiig and Mumolo wrote a main character that could have been played with only minor changes by someone like Seth Rogen—an aimless, well-meaning, funny but insecure person looking for a little bit of direction. But wherever that psychological lockpick exists in the framework of the characters and story, we're never at a loss of sympathy or at least understanding for Annie's plight.

Of course, it certainly helps that the great Freaks and Geeks co-creator Paul Feig brings his own effortless sense of ambiguity to even the most unlikeable characters - especially to Helen, who in another version of this would have been a purely aggressive, calculating and unredeemable bitch. But when the script gives Helen a perfect dollop (rather than the usual deluge) of a comeuppance, it feels like an authentic sort of personal victory for Annie, and paves the way for a realistic reconciliation both for their relationship and the film as a whole.

Overall, this is the kind of film that makes it possible for others to feature primarily female characters without being ghettoized as the "girl version" of a successful male cinematic counterpart, because its characters manage to be defined less by what they are than who. In which case, Bridesmaids isn't just a watershed moment for Wiig, it's one for mainstream moviegoing in general, as much because it breaks down gender barriers as the fact it's just generally funny as hell.