close
A solid night out with the kids 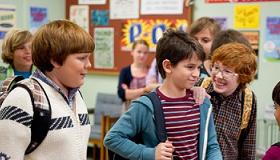 After a domestic gross of $65 million, it is no wonder that Fox has rushed a sequel to their 2010 hit Diary of a Wimpy Kid into theaters. Jeff Kinney's Diary of a Wimpy Kid book series has sold 43 million copies so far and counting, so the initial property was a safe bet from the start. The good news is the sequel, which focuses on the relationship between Greg and his tyrannical older brother Rodrick, is even better than the first edition, in its own sitcom-ish ways. Expect box office to rival but probably not exceed the original film, as continued popularity of the books and the first film in DVD should generate interest for this installment.

All the regulars (minus co-star Chloë Grace Moretz) are back for this go-round, although the emphasis here is the family, as dad Frank (Steve Zahn) and mom Susan (Rachael Harris) are determined to create peace between the wimpy kid Greg (Zachary Gordon) and his rock-band obsessed brother Rodrick (Devon Bostick) who have serious issues getting along. The film has a number of set pieces all designed to embarrass Greg. Gordon is a brave young actor and allows himself to be humiliated in myriad ways involving Speedos and/or jockey shorts. Whether falling flat-faced into birthday cake or being locked in the basement by big ‘bro, this is one kid with a LOT to write in that diary. Also back is best friend Rowley Jefferson (Robert Capron) but, this time he's more subdued, preoccupied by a magic act he's putting together for the big community talent show. The movie's biggest scene comes when the two brothers are left alone as punishment while parents and younger brother Manny go on a weekender. Using this as a chance to throw a party, Rodrick gets more than he bargained for as both he and Greg pay a price for his actions.

Wrap up at the big talent show pays off with everyone getting into the act one way or another and moral lessons learned by all. Although this is basically Malcolm in the Middle-style material, it's largely entertaining and harmless fun, especially for the target audience. Director David Bowers, who comes from animation, gives the proceedings a nice cartoonish tinge. Nostalgic adults will probably enjoy it, too. Gordon makes a great Greg, often perplexed but always willing to take a pratfall—though he's not nearly as nerdy as the Greg in the book illustrations (crudely but nicely used as bumper pieces throughout the film). Bostick is goofily hilarious as Rodrick. Zahn doesn't make much of an impression in the thankless Dad role but Harris is a delight as mom (though the Sarah Palin look they gave her is a little much). Peyton List is a charmer as Holly Hills, Greg's unobtainable object of affection, and Laine MacNeil is back as Patty, his main nemesis. She has a riotous scene belting out Memories with every overbearing Broadway cliché intact.