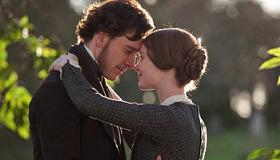 Cary Joji Fukunaga's romantic thriller Jane Eyre is to 19th-century literature what Black Swan is to ballet: a thoroughly cinematic, occasionally exhilarating reimagining of a repertoire standard. Jane Eyre comes dangerously close to pastiche and parody, but Charlotte Brontë's old warhorse is strong enough to withstand most any burden a talented if callow director can impose. Whether this oh-so-contemporary-feeling adaptation will cross over from the cinema-savvy English major set to a broader cross-section of ticket buyers remains to be seen, but it has plenty of time to gain momentum during its late winter roll out.

In tackling Brontë's much-filmed novel, American Fukunaga couldn't have moved further from the trials of the Central American immigrants that occupied his first feature, 2009's Sin Nombre. Jane Eyre is the type of high-falutin' costume fare one expects to see on viewer-supported television or in theaters during the Oscar season. While it's hard to imagine a Jane Eyre in which the central conflict is less cultural or socioeconomic, Fukunaga's interpretation is concerned more with finding one's place in the world emotionally, spiritually and psychically, which, because it's first and foremost a great romance, means falling in love.

Judging by the instinctive fluidity with which he tells the story, it's obvious Fukunaga has found his place behind the camera. And yet Jane Eyre isn't an unequivocal triumph. Despite the movie's success at spotlighting the Goth in Brontë's heroine, it's not as emotionally satisfying as it ought to be. Though it's ingenious in many respects, the flashback structure adopted by screenwriter Moira Buffini detracts from the narrative momentum and ultimate payoff.

The movie's compressed third act is divided between the end of Jane's year-long stay in the vicinity of clergyman St. John Rivers (Jamie Bell)—who took her in after she fled Thornfield Hall (depicted in a wonderfully histrionic and visually arresting opening montage)—and her return to Thornfield. None of the crucial plot points from the latter part of the book receives its due when scrunched together in this manner. On the other hand, using flashbacks to show scenes from Jane's childhood and her banishment by her aunt to the charity school Lowood is especially effective. In between and comprising the bulk of the film is her service as governess to Mr. Rochester's French ward at his secret-filled manor, Thornfield.

Trapped inside this cold, dark Derbyshire pile, Jane resembles a Thomas Hardy character more than a Brontë heroine. She's a caged spirit animated by wanderlust and curiosity. Rather than hide her agitation, describe it in eloquent speeches, or simply faint, her passion and dissatisfaction are made palpable. As quick-witted and hilariously waspish as she can be, she's equally prone to being morose and self-abnegating. To be sure, she's not all warm and fuzzy, or sensuous for that matter. Of course, the success of the piece hinges on the lead performance, and everything's definitely all right with Mia Wasikowska, including her chemistry with Michael Fassbender as Rochester. She's a serious young actress with Meryl Streep-like potential. Likewise, there's nothing to gainsay in the supporting performances of Judi Dench as housekeeper Mrs. Fairfax, or Bell. Amelia Clarkson stands out as the 10-year-old Jane.

Lavish and feverish at times, Jane Eyre flirts with becoming unhinged but never approaches true hysteria. It's never boring, but just when you think it will take off and morph into something unusual and subversive, Fukunaga makes a conventional choice that is both reassuring and slightly disappointing. Adriano Goldman's impatient cinematography has its dazzling moments but not a lot of consistency. On the plus side, this underscores the atmospherics and both Jane and Rochester's moodiness; on the down side, it makes certain choices feel obligatory.

Another positive way of describing this tonal variance is to say Jane Eyre has a dreamlike quality. The particular reverie the film conjures boasts the earthiness of Joe Wright's 2005 version of Pride and Prejudice and many of the supernatural, ghostly elements of a Guillermo Del Toro film. Consider this reviewer bewitched but still clear-headed, transported but with two feet still firmly on the ground. As Rochester confesses to Jane, "You transfix me, quite."