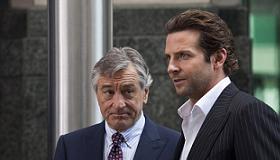 Limitless is the kind of slick trash that upstart distributors often embrace as a stepping stone to the sort of clumsily reckless trash at which big studios uniquely excel. No surprise then that longtime financier Relativity Media-just getting its sea legs as a distributor-would seize on the modestly-budgeted thriller as a way of cutting its teeth for dumber and costlier fare down the line. Token work from Robert De Niro combined with a frenetic, if incomprehensible, ad campaign should give star Bradley Cooper just enough backup to draw opening weekend curiosity seekers-probably not enough to salvage the $26 million picture's long-term prospects but sufficient to enable Relativity to still save face on the release once ancillaries and foreign profits are factored in.

Cooper stars as Eddie Morra, an aspiring New York writer who'll be one missed rent check away from homelessness if he can't deliver his promised novel. Problem is...he hasn't written so much as a page. Then a sudden encounter with his estranged ex-brother-in-law (Jonny Whitworth) changes everything. Claiming to have swapped his drug dealing ways for more legit pharmaceutical work, Vernon slips Eddie a crystalline little pill with the vague promise that it'll make all his woes go away.

Sure enough, the pill miraculously opens every synaptic logjam in Eddie's head, turning him into an instant genius with the ability to process everything, understand everything and intellectually execute at a level far exceeding that of mere mortals...until it wears off. Just like vitamins, "one-a-day" is all that's needed to keep the magic flowing, so Eddie returns to beg Vernon for more only to find out that neither Vernon nor the pill are as legit as previously believed. A short time later, when Vernon turns up brutally murdered, Eddie absconds with a pouch of the magical pills, making them a daily part of his complete breakfast and transforming himself into an overnight stock market sensation. In no time flat, the disheveled slob is a dashing, dapper Wall Streeter, wowing seasoned traders with his uncanny ability to pick stocks and orchestrate deals. Among those who stand up and take notice of Eddie's talents are financial tycoon Cal Van Loon (De Niro), a kind of Warren Buffett/Carl Icahn hybrid, and a mysterious goon who clearly aims to do Eddie the same harm he presumably wrought on Vernon if he doesn't give up the pills.

It goes without saying that the pills eventually manifest some rather nasty side effects, forcing Eddie to confront the physical and moral quandaries meant to help an otherwise amoral and exploitative film regain something loosely akin to a conscience. Such threadbare themes, however, are almost always disingenuous and, as such, rarely very convincing. When all is said and done, Limitless is about stoking a fundamentally adolescent fantasy, namely how fun it would be to pop a pill that would do all the intellectual heavy lifting without all the effort and ethical baggage that necessarily accompany that pesky thing called life. In short, it's about cheating and getting away with it-a fantasy that no half-hearted third-act moralizing can either camouflage or legitimize.

Adapted by veteran screenwriter and producer Leslie Dixon from Alan Glynn's 2003 novel The Dark Fields, Limitless never really attempts to mask its thematic pedigree (Jekyll and Hyde, Flowers for Algernon). A closer, albeit more obscure connection can even be drawn to television's The Bionic Woman which featured a similar plot wherein a previously introduced character ingested a putty-like drug that enabled the emulation of bionic strength, with all of the same messy side-effects.

To his credit, director Neil Burger either doesn't realize or doesn't care that the material is hokey to the point of unintentional hilarity-if not for the film's intermittent moments of hyper-stylization and its almost crippling sense of self-importance, Limitless might have been a truly unwatchable bore rather than just annoyingly silly and tedious. Nonetheless, compared to Burger's previous efforts-The Illusionist (flawed but compelling) and The Lucky Ones, both films he also scripted-Limitless is a clear step backward. From a short-term career standpoint, it certainly better positions him as a director-for-hire, but such a Faustian trade-off would disappoint fans as well as handicap any hope for a longer and more distinctive career.

The good news for all involved is that Limitless is likely to be highly "limited," both in terms of its theatrical life and the impact it's liable to have on the careers of its stars and makers. Relativity, likewise, should learn a good deal from the release, regardless of how badly it fails to recoup its costs. That's going to be a costly lesson for someone, but not until the film is long gone and forgotten and its stars on to bigger and, hopefully, better things.