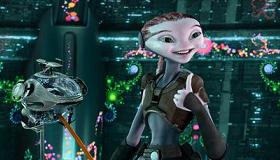 The performance capture process that Image Movers has been perfecting since The Polar Express has never been seen so effectively used as it is in Mars Needs Moms. A sprightly 3D ‘toon adaptation of Berkeley Breathed's popular kids book, Mars Needs Moms is about Martians who kidnap earthling mothers to bring up their offspring. The perfect family film in every way, moms, dads, kids and even those Martians are gonna love this funny, warm and wonderful tale. 3D and IMAX prices will help box office be sweet, making this a good bet to help Disney rise above the second weekend of Rango, its main (but 2D) family competition.

You can see why Robert Zemeckis is a big believer in the performance capture process. After directing Polar Express, Beowulf and A Christmas Carol he's warmed to the scope, setting and characters of Breathed's story. Here, Zemeckis has turned directorial reins over to Simon Wells (Time Machine, Prince of Egypt) who has managed to create a full-bodied environment on the planet Mars that rivals the visuals of Pixar's Wall-E (though it doesn't reach that film's uniqueness). In this tale, 9-year-old Milo (Seth Green) acts up one evening and declares he'd be better off without a mom (Joan Cusack). Just like that, Mom is abducted and shot up to Mars. Milo chases the craft and manages to get on board, leading to his own hair-raising adventure under the red planet's surface. His main encounter is with a free spirited, gadget guy named Gribble (Dan Fogler) who guides him in the ways of the planet and explains his Mom was chosen to bring up Martian kids because the species is incapable of doing it themselves. With the Supervisor (Mindy Sterling) bound and determined to use Milo's Mom to her own end, it's up to Milo, with help from the reluctant Gribble and rebel Martian girl Ki (Elisabeth Harnois), to locate his mother and save the day before it's too late.

Technically the film is a marvel, exhibiting the most realistic use of the performance capture yet. Characters are vivid and believable and action sequences are flawless. The technique has come a long way from the "dead eye" look of Polar Express and is particularly effective here, especially in the case of greasy Gribble, beautifully voiced by Fogler who never misses a beat. Green, on the other hand, is a little long in the tooth to be playing a 9-year-old, but manages it perfectly with his inventive, wide-eyed facial work. There turned out to be no way around his adult larynx, however, and another young actor (Seth Dusky) was called in to do the vocal interpretation of Milo. Cusack is warm and winning as Mom and Sterling nails the evil Supervisor.

With great use of 3D Mars Needs Moms should be an out-of-this-world hit that delivers a strong message about the importance of family and a mother's love for her children.