close
Days of Heaven for our times 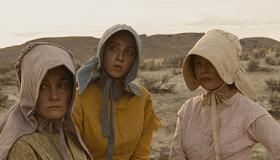 Indie filmmaker Kelly Reichardt steadily gains more admirers as home video audiences discover her feature films River of Grass ('94), Old Joy ('06) and Wendy and Lucy ('09). Reuniting with screenwriter and frequent collaborator Jonathan Raymond and Wendy and Lucy star Michelle Williams boosts anticipation for Reichardt's latest feature, Meek's Cutoff. Tackling her first period drama (a Western no less) also brings the film extra attention from the independent film community. Epic in scope, and featuring a powerful lead performance by Williams, Reichardt does justice to the myth of the wagon train settlers and makes a Western every bit as beautiful and poetic as Terrence Malick's Days of Heaven, and thankfully a bit more energetic. Purchased by Oscilloscope Laboratories after its North American premiere at the 2010 Toronto International Film Festival, and prior to its New York Film Festival screening, Meek's Cutoff will out-perform the modest box office of Reichardt's previous film Wendy and Lucy and continue to build attention to this masterful filmmaker.

Emily and Solomon Tetherow (Williams and Will Patton), Millie and Thomas Gately (Zoe Kazan and Paul Dano) and Glory and William White (Shirley Henderson and Neal Huff) set out on the Oregon Trail in 1845. These three families hire mountain man Stephen Meek (Bruce Greenwood) to lead them across the Cascade Mountains. Meek leads them on a shortcut across the high plain desert filled with salt lakes, rocks and brush. Before long, the would-be settlers become hungry and thirsty. Their mistrust of Meek climaxes just as a Native American crosses their path; a stranger who may lead them to safety or may be setting up a trap.

Reichardt may be a leading American independent filmmaker, but she makes "European" movies in the truest sense of the word: action is subtle, themes are philosophical and photography is artful. Thanks to ReichartÕs editing, Meek's Cutoff unfolds with a deliberate pace. Collaboration with cameraman Christopher Blauvelt, continues to prove Reichardt an expert in turning vast landscapes into key characters. In the case of Meek's Cutoff, the stunning landscape surrounding the Cascade Mountains generates fear among the settlers nervous about the possibility of dying on the trip.

As Malick's Days of Heaven was inspired by the paintings of Andrew Wyeth, Henry Farny's work inspires Meek's Cutoff; the landscape photography is as stately. But just when Meek's Cutoff begins to feel as stiff as stretched canvas, Williams appears with a scene full of gusto and breathes life into the movie

Reichardt makes great use of her cast, from veteran Will Patton as the soft-spoken leader of the wagon train, to Paul Dano and Zoe Kazan as a young couple overwhelmed by the challenges of the journey.

Still, the film's most powerful performance belongs to Williams, who shows a spirit and resolve seldom seen before. Her scenes confronting Meek are explosive and give the film a strong emotional core.

A period drama like Meek's Cutoff is new for Reichardt but she tackles this story like she does all her features, with an emphasis on adult characters in need and their relationships with the world around them.

Strong critical reviews will help Meek's Cutoff find a select specialty film audience. Box office will be modest for Oscilloscope Laboratories due to the experimental nature of the movie, as well as its limited platform release, but it's a release certain to place Oscilloscope on many Top Ten critics lists. More importantly, an Oscar campaign for Williams is something Oscilloscope should consider. Her performance is that good and, besides, it's not often that a small arthouse release has the chance to break out during the highly competitive awards season.