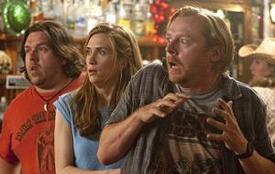 A smart-ass, earth-bound alien takes a road trip with two British fanboys in this contemporary spoof of space invader classics like E.T. and Close Encounters. Simon Pegg and Nick Frost wrote the screenplay and star as the nerdy tourists and it's just the kind of inspired, hysterical, spot-on spoof that could only come from the guys responsible for Shaun of the Dead and Hot Fuzz. Fans of the pair are sure to line up and Paul, which has already sported strong numbers in international territories, could be a sleeper hit, with its sharp-tongued central character and many witty references to popular sci-fi flicks. Look for decent opening box office and good word of mouth among the faithful.

Graeme Willy (Pegg) and Clive Gollings (Frost) are visiting America on the trip of their dreams: first a stop at ComicCon and then a road trip to the UFO heartland and the forbidden Area 51. This is where they run into Paul, an alien who's been used by the Government for the past 60 years to pass on secrets about his extra-terrestrial brethren. His usefulness running out, Paul fears for his life and escapes by flagging down the guys' RV as it passes by. With his pithy comments and take-no-prisoners attitude, Paul (voiced by Seth Rogen) is a one-of-a-kind jokester who gives these two English geeks the ride of a lifetime. Of course the Government isn't far behind and federal agents led by Lorenzo Zoil (get it?) played by Jason Bateman are hot on Paul's tail, along with the fanatical father (John Carroll Lynch) of Ruth (Kristen Wiig), a bible thumper they "kidnap" along the way. Paul and his new found friends have to outrun their pursuers to get the alien back to his spaceship in order to return home.

Pegg and Frost, with the help of director Greg Mottola (Superbad), provide hilarious dialogue and outlandish situations, although the Christian right may find treatment of the religious fanatic fringe rather (ahem) unfunny. The film is mostly good-hearted fun and smart casting really makes it soar. One choice bit involves a flashback with the voice of Steven Spielberg calling on Paul for advice on E.T. There's also an amusing reference to co-star Sigourney Weaver's penultimate Aliens battle along with countless other choice bits. The cast is super, with Pegg and Frost anchoring the craziness with a nice believability and sweetness. Rogen's vocal work as Paul is outstanding while Bateman and SNL vet Bill Hader do well as the determined agents. Wiig is a riot, and note should be made of Blythe Danner's touching bit as a believer who had a run in with Paul many decades earlier and now finally confronts him over it. Kudos to the outstanding special effects and animation teams that worked wonders bringing Paul to life.

Paul is a close encounter with the comic brilliance of Simon Pegg and Nick Frost that makes going to the movies fun again.