close
Rising to the occasion (and sea level) 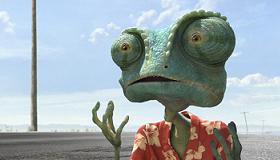 A tenderfoot wanders into a lawless town and becomes the unlikely savior of a fearful and beaten citizenry. That sounds like the logline for many a typical Western, but there is nothing typical about Rango, an animated family film starring Johnny Depp as a suburban chameleon who finds himself literally out of water when he becomes sheriff of an arid desert burg. Wonderfully animated, witty and wildly imaginative, it's full of jokes that will fly over kids' heads (or even their parents if they aren't dedicated film buffs) but should still hold their attention with its cast of colorful characters. This reteaming of Depp with his Pirates of the Caribbean director Gore Verbinski looks like a lock to emerge as the first genuine blockbuster of 2011.

A sheltered reptile whose everyday companions are a windup fish and a broken doll, Rango (Depp) is clearly out of his depth when an accident leaves him stranded in the Mojave Desert. But when he wanders into a town called Dirt, he finds creatures worse off than himself. The burg's currency is water and it's nearly gone, according town banker Mr. Merrimack (Stephen Root). Rango's new lizard friend Beans (Isla Fisher) is about to lose her farm. The town's last lawman is six feet under and lording over everyone in town is the mayor, an evil tortoise (Ned Beatty). Rango is in way over his head, but he is also a frustrated actor who lives by the motto, "Every story needs a hero." So when the mayor wants to make him sheriff, he is only too willing to step into a role for which he is monumentally unsuited.

The movie references fly thick and fast in this smart comedy. Western fans in particular will have a field day sorting them out, but there are other allusions, too, nods from Fear and Loathing in Las Vegas to Chinatown. But movie in-jokes are not the only things going on here. There is humor to be found from elements commonplace in a chameleon's tank, to the Greek chorus of mariachi owls that accompany the hero on his journey and continually prophesize his death, to Rango's armadillo pal Roadkill (Alfred Molina)—like so many of those creatures one sees along desert highways, the first time Roadkill is spotted he's lying in the middle of the road.

That view of an armadillo with a tire track dissecting his middle is only one example of the care given to Rango's visuals. There is a lot of humor in the imagery with characters like Roadkill or the army of bats equipped with Gatling guns, but then there are the denizens of Dirt. Appropriate for such an arid place, most of them look a little desiccated. These are not the cute animals of the average kiddie movie. These are downright ugly creatures like the wizened, mole-like Balthazar (Harry Dean Stanton) or the villainous Rattlesnake Jake (Bill Nighy). Even the rabbit Doc (Stephen Root again) is not a fluffy, cuddly thing—he's missing an ear.

Cinematographer Roger Deakins served as visual consultant on Rango, as he did on Wall-E and How to Train Your Dragon, and his input shows. From the water effects to the way the hot sun shimmers on the horizon, to the look of the fur on the animals, this is one spectacular-looking movie. There is a sense of texture and a play of light and shadow that is absolutely gorgeous and so rich that its 2D images suggest 3D.

Verbinski went against normal practice in recording his audio, not having each actor record in isolation, but instead bringing them together to perform. Perhaps that accounts for the playfulness evident in most of the performances. Or maybe the actors just realized they were onto something special. The entire cast is charming, but especially Depp as the little lizard with big dreams who gets to be the star he's always wanted to be in this fresh and funny movie.