close
Enter, pursued by a wolf 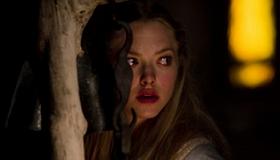 Twilight director Catherine Hardwicke moves forward from the teenage vampires of her smash film to this lush adaptation of the classic fairy tale Red Riding Hood, starring Amanda Seyfried as the titular heroine, here called Valerie. Young moviegoers who know Hardwicke solely for Twilight will recognize the youthful romance and soapy melodrama involving Valerie and her handsome male suitors Peter (Shiloh Fernandez), a poor woodcutter, and Henry (Max Irons), a wealthy blacksmith. Amanda Seyfried claims a strong female teen fan base, although the film's influence on social networking sites pales in comparison to its opening competitor Battle: Los Angeles. However, teenage boys will show little interest in a movie that resembles a classic Disney cartoon and mixed reviews will fail to generate substantial crossover business from Hardwicke's adult fans who remember her best for her breakout Sundance drama thirteen. While Red Riding Hood's story stumbles one too many times en-route to grandmother's house, Hardwicke and her creative team do create some stunning images with Valerie's long, flowing, blood red cape. Hardwicke shows a strong grasp at epic fantasy with Red Riding Hood; her nemesis is not a man-eating wolf but an unsurprising script.

Recent attacks by a werewolf have left the people of medieval Daggerhorn frightened. Valerie (Seyfried), the prettiest girl in the village, has some drama of her town. She wants to escape with her longtime love Peter (Fernandez), but her parents (Billy Burke, Virginia Madsen) have promised her to Henry (Irons) and his wealthy family. Valerie stands brave, despite the death of her sister at the hands (claws?) of the werewolf and the allegations of witchcraft lodged at her by church inquisitor (Oldman). As the mystery thickens and everyone from her competing suitors to her hippy grandmother (Julie Christie) appears to be possible candidates for werewolf-dom, Valerie hunts to find the truth behind the beast.

Amanda Seyfried takes command front and center of Harwicke's fairy tale via her wide, blue eyes and ruby lips as red as her trademark hood. Seyfried is a likable heroine as smart and strong as she is pretty. Thankfully she's in just about every scene because the movie fades without her. Seyfried will be seen next in the final episode of the HBO series Big Love and director Andrew Niccol's Now opposite Olivia Wilde, Cillian Murphy and Justin Timberlake. She's earnest throughout Red Riding Hood, even when scenes teeter on the ridiculous. Still, by the film's climax, when the monster reveals his identity with little surprise, Seyfried can only support so much on her red-clad shoulders.

Fernandez, soon to be seen in the '80s drama Skateland, complements Seyfried well with his dark hair and bedroom eyes. Max Irons comes off somewhat bland as the wealthy competitor for Valerie's heart. Gary Oldman makes the most of his grand entrance as Father Solomon, a cruel church leader clad in crushed purple velvet that later becomes an appropriately hammy werewolf hunter. Unfortunately, his young co-stars fail to match his risk-taking.

Hardwicke and cinematographer Mandy Walker (Australia) make beautiful use of the Canadian Rockies to show Peter and Valerie hiking through the snow with her blood red cape flowing behind them. Production designer Thomas Sanders (Saving Private Ryan) recreates a medieval village and thick forest on a Vancouver soundstage with wonderful attention to detail, including thick spikes poking out of the tree trunks and village houses built on elaborate stilts as precautions against the wolf. Visual effects supervisor Jeffrey A. Okun and stunt team leader Andy Cheng keep the black-haired werewolf believable even during those outrageous moments when it speaks to Valerie.

It's worth noting that the origin of this latest tweak on the Red Riding Hood fairytale belongs to producer Leonardo DiCaprio and his team at Appian Way who thought up the idea of using a werewolf instead of a wolf. It's a good idea, but one that scriptwriter David Leslie Johnson fails to bring to suspenseful life.