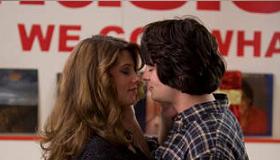 Filmmaker Anthony Burns turns back the clock to 1983 for his sweet coming of age drama Skateland and recreates small town atmosphere down to the retro wardrobe of his teen characters and the period details of their beloved hangout, the town roller rink. Skateland premiered in the U.S. Dramatic Competition of Sundance 2010 and went on to play SXSW and other festivals. It opens May 13 via a platform release from the distributor-for-hire outfit Freestyle Releasing. The scale of its platform release will ultimately determine its theatrical earnings but expect business for Skateland to be modest with the majority of people discovering the film on home video or VOD.

Nineteen-year-old Ritchie (Shiloh Fernandez) faces standard teenage heartbreak with his girlfriend Michelle (Ashley Greene) and drama about bickering parents and his own life decisions. His steady source of happiness is his job at Skateland, the skating rink in his small East Texas town. But all seems lost for Ritchie when his beloved Skateland looks to shut down due to lack of business in the post-Disco era.

Veteran character actor James LeGros and D.W. Moffett help round out the solid supporting cast, but it's Shiloh Fernandez (Red, Deadgirl) that brings soul to Skateland and makes it more than a pretty period postcard. Box office should gain steam from teen fans who recall Fernandez from a key role opposite Amanda Seyfried in Red Riding Hood.

Actress Ashley Greene continues to earn attention thanks to her role as a pretty vampire in the Twilight saga but she makes better use of her charisma in Skateland as the girlfriend who wants more ambition out of her boyfriend.

Fernandez makes for a likable young hero with his shaggy dark hair and bedroom eyes. He also stacks up well against the other young heroes onscreen currently. He's better looking than Topher Grace of the '80s-set comedy Take Me Home Tonight, and no less brooding than I Am Number Four and Beastly lead Alex Pettyfer.

Burns, a former journalist and screenwriter, and cameraman Peter Simonite make great use of the film's East Texas setting. Skateland may be produced with limited resources, but Burns captures the look and spirit of the times with perfect detail. Costume designer Kari Perkins draws inspiration from her work in Richard Linklater's Dazed and Confused. Production designer Chris Stull (Machete) makes great use of every prop, from the American muscle cars in the Skateland parking lot to the album bins at the Musicland store where Michelle works. Editor Robert Hoffman maintains an easygoing pace from start to finish. Musician Michael Penn and music supervisor Roanna Gillespie complement the images with an uplifting score.

Most '80s flashbacks, like Take Me Home Tonight (set in summer of '88) or Hot Tub Time Machine play for laughs, but Burns aims for something more substantial in Skateland. Few of the cliché characters one expects in these period movies (like school nerds or loser sidekicks), pop up in Skateland. In fact, its small town period setting and warm storytelling earn comparisons to the recent coming of age drama Adventureland and the classic Breaking Away. Skateland will not touch the earnings total of a wide release like Take Me Home Tonight but it will make a persuasive calling card for Anthony Burns and his cast and crew. Skateland also has heart, which takes precedence over slapstick laughs anytime.