close
Speed in a capsule 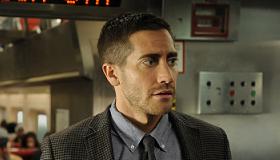 A Hitchcockian thriller with a bit of Unstoppable and a little Unknown, Source Code is a pulse-pounding flick about a decorated soldier who wakes up in the body of another man and is thrust into a clock-ticking plot to find the mysterious bomber of a Chicago commuter train. With the capable Jake Gyllenhaal in the lead and good support from Vera Farmiga and Michelle Monaghan, this nifty nail-biter could do nice spring business at the box office and will certainly clean up later on DVD.

Gyllenhaal is Captain Colter Stevens and we first meet him on a seemingly uneventful train trip. He meets a young woman (Monaghan) and things go smoothly until the train blows up. Suddenly Stevens is thrust into a capsule, communicating via closed circuit screen with Carol Goodwin (Farmiga) who's in charge of an operation to find the bomber before he can strike a commuter train. The convoluted plot has Gyllenhaal's character in the body of an avatar that can instantly be vaulted back onto the train for his last 8 minutes of life. This buys him time to identify the bomber among the passengers. Of course all of this perplexes Stevens, who's has no idea how he was chosen for the mission or why he keeps getting boomeranged through time and space. Slowly we see Stevens is an unsuspecting pawn in a Twilight Zone-inspired Government anti-terrorist plot. With each trip back to the train, Stevens becomes more paranoid and he enlists Monaghan to help him solve the puzzle and get out of this escalating nightmare.

Although the basic premise means there is a repetitive series of events that will cause Gyllenhaal to go back and forth between the two set pieces, director Duncan Jones, working from Ben Ripley's clever if contrived script, keeps all the puzzle pieces in constant motion and keeps the audience on the edge of their seats. Initially, the subject of the film is as much a source of frustration for the audiences as the characters, but the third act turns this around with a satisfying finish. Though it's completely far-fetched, it works well as a thriller and should deliver some sharp grosses from audiences looking for a cool April thrill ride at the movies. Gyllenhaal is ideally cast here, the perfect Hitchcock-style everyman taken out of his comfort zone and thrown into events he can't explain. Monaghan is a good foil while Farmiga is basically trapped behind a desk and not given much dimension beyond the requirements of her straightforward role. Technically, the film is top notch with terrific effects and sleek production values.