close
Who’s this joke on, anyway? 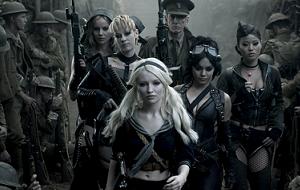 Tackling his own original screenplay, Zack Snyder (300, Watchmen) keeps his reputation for outlandish visuals intact but strikes out as a storyteller. This misbegotten mishmash of action and fantasy enters the mind of an institutionalized girl who escapes her reality by imagining herself and her fellow inmates in daring battles...or something like that. Trying to explain the "plot" is daunting and people's inability to do so is (literally) going to affect word of mouth after opening weekend. With no built-in association to a video game or a graphic novel, this almost laughable mock-adventure may find initially decent box office response from undemanding fanboys and teen girls giving Warner Bros at least one good weekend before receipts take a nosedive and audiences discover they're the ones getting sucker-punched. International returns may have to save it.

If you thought the trailer was confusing, try sitting through 110 minutes worth. Snyder clearly has talent and a great eye, but his pedantic, uninspired concept gives us nothing to hang on to. The film opens in an intriguing, atmospheric fashion, with backstory on Baby Doll's (Emily Browning) commitment to Lennox House, an asylum in which lecherous warden Blue (Oscar Issac) and Madam Gorski (Carla Gugino) will lobotomize Baby Doll and then hand her off to the mysterious High Roller (a wasted Jon Hamm). Of course, this Lennox House of horrors is a place from which Baby Doll seeks escape and she finds it (sort of) through the asylum's interpretative dance show (I wish I were making this up). We never actually see anyone dance before the scene shifts to gut-busting action, but regardless Baby Doll and the other girls, Sweet Pea (Abbie Cornish), Rocket (Jena Malone), Blondie (Vanessa Hudgens) and Amber (Jamie Chung) band together in suggestive leather outfits to battle a series of "enemies" including Nazis, robots, samurai and (Snyder's piece d'resistance) a fire-eating dragon. Sucker Punch may not have started out as a video game but it's clearly going to become one. These Walter Mitty-esque fantasies make no narrative sense and seem to be solely the product of Snyder and co-writer Steve Shibuya's limited imaginations. All of these set pieces would be fine if there was someone or something to root for. Instead, every time Baby Doll starts to tap her toes we are thrust into another pointless action sequence that stops the movie cold (or starts it depending on your taste). The only thing linking any of this content is a list of five items presented by the Wise Man (Scott Glenn) that the girls must retrieve during these various hair-raising adventures.

Sucker Punch is structured like an old musical: the story crashes to a halt for each big number, but in this case it's an elaborate PG-13 rated action sequence instead of a song-and-dance (an R would kill the potential audience for this thing). Snyder fails to develop any flow and after half an hour most intelligent viewers will just tune out. Performances are strictly one-dimensional with only Cornish preserving any dignity. Gugino is awful with a bad Russian accent and ridiculous costume. Issac is strictly by-the-numbers and Browning never gets a handle on Baby Doll.