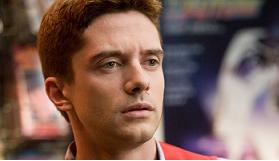 Take Me Home Tonight, a comedy set in the '80s, was titled Kids in America when it was shot in 2007. There are two reasons the movie gathered dust for almost four years. The first comes from star Topher Grace, who plays an aimless, 23-year-old MIT graduate trying to reconnect with his high school crush at an all-night party. He claims executives were too nervous about scenes depicting cocaine use. This is nonsense. The majority of the coke goes up one adult nose and is ingested for comedic effect. The cocaine defense is just a smokescreen to hide the second, more accurate, reason the movie took so long to get released: it's not very good. It's only sporadically amusing and it's certainly not original, unless the definition of original has been broadened to include copies of things that were original twenty-five years ago. The retro, party hearty marketing blitz that failed to attract college kids to Hot Tub Time Machine will result in similarly tame box office here.

The movie unfolds in 1988 for, as it turns out, no compelling reason. The story doesn't require it and 1988 was hardly a year of cultural transition begging to represent the dawning of adulthood for our slacker heroes. Even satire isn't the aim, which is admirable, though some potshots would have livened things up. The filmmakers claim the '80s milieu was meant to capture the spirit of a John Hughes film. While Hughes excelled at crafting authentic young characters, this movie does not. Plus, Hughes's signature efforts took place in high school and Matt Franklin (Grace) is back home after graduating college. To the disappointment of his police officer father Bill (Michael Biehn), Matt is wasting his very expensive engineering degree by hawking VHS tapes at a Sherman Oaks video store. He's in a troublesome post-collegiate stall with no idea what to do with his life. His sister Wendy (Anna Faris) is in better shape. She has a meathead boyfriend named Kyle (well-cast Chris Pratt) and is awaiting word on her application to attend graduate school at Cambridge. The strongest and most unfortunate influence on Matt is his childhood best friend Barry. He is played by Dan Fogler, who won a Tony Award in 2005 and has since come to Hollywood to star in movies like Take Me Home Tonight. Fogler is the best thing about the movie; there's investment and intensity in his goofiness. Fueled by cocaine and stupidity, Barry garners almost every laugh in the film (the rest come from a wheelchair-bound Demetri Martin). Yet Fogler avoids mugging, even during one of those obligatory faux-outrageous sex scenes that were already tired in 2007.

Production designer William Arnold and cinematographer Terry Stacey don't call undue attention to their expert reproduction of 1988 Los Angeles, which is nice. The temptation was there, since most of the film takes place at a wild all-night party where '80s archetypes could have gathered in an extended Saturday Night Live sketch. Instead, focus stays primarily on Matt's desire to attend the epic kegger and impress Tori (Teresa Palmer, looking like a glam Kristen Stewart), the girl he loved from afar in high school. Since Tori is a success in the financial world, Matt scores points by claiming to be employed at Goldman Sachs. He also claims to own the Mercedes that Barry stole earlier that day, partially out of revenge for being fired from his car salesman gig. Over the course of the long evening, Matt tries to lie his way into Tori's pants until all that's left to wonder about in Jackie and Jeff Filgo's structured and unadventurous screenplay is how she'll finally learn of his multiple deceptions.

Looking like a Back to the Future-era Michael J. Fox, Grace is too old for this part. He also can't entirely shed the layer of smugness that always makes him look like he's trying to get away with something. That's too bad because the movie is his baby. He stars in it, co-wrote the story and has producer credit. But it's hard to imagine that his dream was to make a warmed-over homage to movies that achieved what this one cannot. It's one thing to replicate the look of an '80s film, but when you also replicate its themes you're left with a redundant and unnecessary movie about party people shot-gunning beer until everyone collectively takes one small step into adulthood. Matt's inability to find purpose after all claims to adolescence are exhausted is a problem that would hit home in the films that Take Me Home Tonight are patterned after. What we have instead are upturned collars and the Safety Dance, which were bad enough at the time.