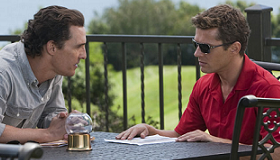 The most surprising courtroom drama since 1985's Jagged Edge, The Lincoln Lawyer is a don't-miss cinematic page-turner with enough twists to fill five movies. Matthew McConaughey gives the performance of his career as a slick criminal defense attorney who finds himself in a moral quandary and professional conundrum when he discovers his underhanded client has been manipulating him. Fans of the actor and crime novelist Michael Connelly should flock to theaters for this gripping whodunit and adult audiences looking for crackerjack entertainment will likely spread great word of mouth, making this a box office winner fueled by older moviegoers who might remember when this kind of thing was a Hollywood staple.

Based on Connelly's popular and pulpy best-seller, adapted for the screen by John Romano, the potboiler plot revolves around Mickey Haller (McConaughey), a scrappy, shrewd defense attorney whose office is the back of a chauffeured Lincoln Town Car. He ‘s not your typical high-powered attorney but a bottom feeder who lives off the dregs of society and makes just enough to support his ex-wife (Marisa Tomei) and their young daughter. His mobile office takes him from one meeting with petty criminals to another. In need of more money he agrees to defend rich kid Louis Roulet (Ryan Phillippe) who has been accused of rape and murder and may not be as innocent as he professes. This leads to a chess match between attorney and client, especially when it appears that Roulet may not only be guilty of the current crime but also one four years earlier for which another of Mick's clients (Michael Peña) is doing time. Mick is now determined to free his old client but the question becomes how he can do that without breaking attorney/client privilege with Roulet.

Directed with great style by Brad Furman, The Lincoln Lawyer is the kind of film Paul Newman might have done in the '60s; it's a big movie star showcase featuring an outstanding supporting cast playing vividly etched characters. Only the second of Connelly's nearly two dozen crime novels to make it to the screen (2002's Blood Work was the last, and a flop for Clint Eastwood), it's a wonder it's taken this long for Hollywood to discover the worth of this writer's ready-made movie plots. It is true this type of widescreen legal drama fell out of favor a while ago but hey, a good story is a good story and this one delivers on all counts. McConaughey fits the role like a glove and after five years of slumming in mediocre romantic comedies it is nice to see him back in the dramatic saddle. William H. Macy as his crafty investigator is colorfully drawn and likeable while Tomei makes a spunky ex who still has some sexual attraction for Mick. Phillippe embodies the essence of the spoiled Beverly Hills rich kid who thinks he can control everything, while Frances Fisher gets a couple of key scenes as his society mother. The supporting cast also contains standout turns from Josh Lucas as a rival prosecuting attorney, John Leguizamo as a scrappy bail bondsmen, Bryan Cranston as a homicide detective and country music superstar Trace Adkins as the leader of a motorcycle gang who is also one of Mick's clients.