close
Not your average Mr. Mittens 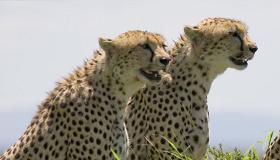 This is the third Earth Day release from the rebooted Disneynature series after Earth and Oceans, and it's set among the magnificent vistas of Kenya's vast Maasai Mara National Reserve, where a cluster of warthogs and crocodiles and hippos are supporting players in a real-life Lion King. Narrated by Samuel L. Jackson African Cats focuses on the troubles of three key locals: a lion cub, the older leader of the Pride and a mother cheetah trying to raise her brood in the shadow of constant danger. Box office returns should be in line with the middling grosses of the first two Disneynature docs, and may even exceed them due to more vivid subject matter and aggressive storytelling. As is Disneynature's custom, a portion of the first week's receipts will be donated to help save the savanna.

There are many nature films and TV shows that focus on the fascinating world of lions and cheetahs. To set theirs apart, directors Keith Scholey (who also wrote the narration) and Alastair Fothergill spent nearly three years capturing this remarkable footage, then edited it with an eye to entertainment and smartly packaged the doc as a compelling battle for survival in the wild waged by animals we come to know and like. There's Fang, the leader of the River Pride, a proud but battered lion being menaced by black-maned Kali and his four fierce sons. Under Fang in the Pride is aging lioness Layla and her little cub Mara, the survivor of her litter whose will to live is constantly tested. Nearby is cheetah Sita, a crafty “single mother,” as Jackson calls her, who must protect her pack of newborn cubs—she has five, but the odds are only one will survive.

As Jackson's constantly points out, all of these animals are in constant peril, trying to make it in a land where survival of the fittest is a very real thing. If they scrape by one near-death experience, Jackson is quick to remind us it may only be a temporary reprieve—danger lurks around every bush. The filmmakers don't sugarcoat the laws of nature and that could be problematic for the youngest members of the audience. We see animals die and limp to certain death. The film's ‘G' rating may be a little lenient, so be warned that the film can be intense, despite the cuddly nature of its TV ads. Still, this is another Disneynature triumph not to be missed, especially if you are a fan of these very cool cats.