close
Doesn’t hold a martini to the original 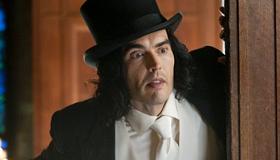 1981's sleeper hit, Arthur grossed nearly $100 million in the U.S. alone, won two Oscars (for best song and supporting actor, John Gielgud) and nominations for star Dudley Moore and original screenplay. Now, Hobson the butler switches genders from John Gielgud to Helen Mirren and Russell Brand reprises the title role. The story, about a happy-go-lucky drunk who'll lose his fortune if he doesn't marry, hasn't changed, but somewhere along the way it has lost its reason for being. The perfectly chosen cast may bring in some early coin but it's hard to imagine this disappointing retread will be in it for the long haul. Down the line on DVD/Blu-ray it will look positively stale on shelves next to its far superior inspiration.

Certainly Arthur is a role that Brand is born to play, and with a producing credit, this Arthur was clearly a Brand project from the beginning. While he acquits himself nicely (though the shadow of the late, great Moore is too big to overcome), Brand had a more believable contemporary incarnation of Arthur in Aldous Snow, his character in Get Him To The Greek, and it was a much more satisfying showcase for his talent. Switching his faithful, no-nonsense butler to a female in the form of Mirren was an inspired idea, but it doesn't quite come off. Original director and writer Steve Gordon's script has been updated with contemporary references but is still largely intact in Peter Baynham's adaptation and Jason Winer's by-the-numbers direction. Arthur ‘s carefree existence is threatened when his mother (Geraldine James) says she'll take away his $900 million inheritance unless he marries Susan (Jennifer Garner), the take-no-prisoners society climber who only wants to wed him for his name. Complications arise when he falls for a sweet, ordinary girl (Greta Gerwig) of which his family does not approve. Trying to keep him in line through all of this is his faithful nanny (Mirren) who offers sage advice and tries to get him to clean up his act.

The drunken antics of the first seem to have been toned down somewhat in this more fanciful and politically correct version of the tale; as a result the story has lost much of its sharpness. This Arthur feels flat and lifeless, especially when compared to its highly successful predecessor. Part of the blame should lie with Winer's listless direction, which eschews wide screen glories for claustrophobic set ups, and Uta Briesewitz's dark and depressing cinematography. Both Winer (the sensational Modern Family) and Briesewitz (HBO's Hung) have worked primarily on the small screen and the limitations imposed there have crept into their uninviting work here.

Aside from nice attempts from Brand and Mirren, who don't click the way they should, there's not much room for the supporting cast to shine. In the Liza Minnelli role, Gerwig exhibits the proper innocence and likeability but doesn't have much chemistry with Brand, while Garner has the thankless "villain" part playing it one note all the way over the top. Nick Nolte is wasted as her father while Luis Guzmán, as Arthur's Chauffeur, has a couple of fun moments.