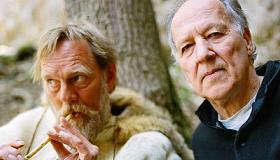 Is any filmmaker more comfortable moving between the didactic and the lyrical, between quotidian facts and profound speculation? In his latest nonfiction venture, Werner Herzog goes inside France's Chauvet Cave to once again reflect on mankind's relationship to the natural world. While not as cogent as his acclaimed documentaries Grizzly Man and Encounters at the End of the World, Cave of Forgotten Dreams has the distinction of being shot in 3D. Ideal for showcasing the ancient art on the cave's walls, the format upgrade doesn't presage a mammoth cash influx since the movie will be exhibited in only a handful of 2D and 3D-equipped theaters.

Besides, Herzog's mindset and the term blockbuster simply don't go together. With his idiosyncratic blend of serendipity, bluntness and mischievous irony, he's able to get at deep questions like no other documentarian. The way he comes across as simultaneously whimsical and objective would baffle most bureaucrats; and so it's a credit to French cultural authorities that they cleared Herzog and his tiny crew to be the first filmmakers to set foot inside this prehistoric marvel.

Located in southern France, Chauvet Cave houses some of the oldest extant human artwork. Thanks to a massive rockslide, the cave was sealed off for 20,000 years. Since its discovery in 1994, only a select group of scientists and support staff have had access for a few weeks each year. And the duration of each excursion during those periods is further limited by the cave's fragile geology and potentially toxic atmosphere. Like an ancient gallery amidst intricate crystal formations and piles of animal bones, the cave walls provided the canvas for pristine illustrations of horses, cattle, lions, panthers, bears, rhinos and hyenas. Carbon dating suggests they were drawn 30,000 years ago.

As usual, Herzog narrates. He begins by putting his visit in the spring of 2010 into context and authoritatively conveying pertinent facts. In awe of the cave for what it is and what it represents, he's also wary and thus primed to slyly puncture any pretense and follow any crazy tangent. This comes out during interviews with a number of the curators and scientists connected to Chauvet in an official capacity. And he goes further afield. In two hilarious sequences, a balmy Master Perfumer prattles on about truffles and an enthusiastic archeologist dons an Inuit costume and plays the Star Spangled Banner on a primitive flute he fashioned based on his research. Nobody sniffs out oddballs better than Herzog.

Back in the cave, Herzog asks probing questions about what his footage reveals and often supplies surprising, esoteric answers. Likening the drawings to film frames is not an example, although it does cue a clip of Fred Astaire dancing. The comparison to animation cels isn't startling either, even if Herzog's vivid demonstration is airtight. Somewhere along the line, he manages to squeeze in a loopy reference to that cultural high-water mark Baywatch. And in a beautiful, lucid passage he wonders how the footprints of an 8-year-old boy came to be preserved next to wolf tracks: Was the wolf stalking the boy? Were they friends? Or were the sets of prints made thousands of years apart?

During the movie's longest sequence (and in what constitutes its dramatic climax) his camera slowly feels its way over the cave walls and studies the drawings while celestial chants play on the soundtrack. It dawned on me watching this mesmerizing interlude that Herzog, at least as a documentary filmmaker, is first and foremost a teacher, a pedagogue who takes his primary function to be showing us what to look at and instructing us on how to look at it.

He cannot leave it there however. Always a truth-seeker, he's compelled to share his own considered opinion. In this case, that means a dire prognosis for human civilization and nature alike, traceable to mankind's hubris concerning technology. Herzog ends Cave of Forgotten Dreams by visiting a tropical biosphere built in the vicinity of Chauvet to study the effects of waste discharged by a nearby nuclear power plant. There he encounters albino crocodiles, haunting symbols of how far we've evolved from the people who made the art inside the cave and yet how close to them and their caveman conditions we remain. Straight out of science fiction, these mutated creatures are also reminders that the literal and the fantastical—reassuringly predictable outcomes and horrific unintended consequences—are never far apart in a Werner Herzog film.