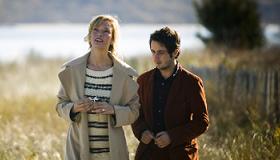 There's a proud tradition of young filmmakers making their feature debut with a coming-of-age tale, and Max Winkler's Ceremony makes its mark by being one that's surprisingly mature. Winkler previously shepherded Michael Cera and Clark Duke through their terrific, woefully unavailable web series Clark and Michael, and now writes and directs this charming forbidden romance about a kids' book writer who recruits a childhood buddy to crash the wedding of an older woman, his former fling. Understated and far more original than its Wes Anderson-lite impression might suggest, Ceremony is a strong debut that may not do great box office during its theatrical run, but will find a comfortable spot on the DVD shelf among the collections of folks who worship at the altar of Anderson, Whit Stillman and Noah Baumbach.

Michael Angarano (Snow Angels) plays Sam, a children's storyteller who hosts readings of his work where no one but his longtime pal Marshall (Reece Thompson) attends. Following the release of his latest tome, the two of them take off for upstate New York where Sam swears they'll have a chance to catch up and reconnect, but their getaway is interrupted when he insists that Marshall get suited up to crash a nearby wedding, despite the protests of the bride, Zoe (Uma Thurman), with whom Sam enjoyed a fling back in New York. But as Zoe's future groom Whit (Lee Pace) proves to be more than a worthy competitor for her affections, Sam and an increasingly exasperated Marshall are forced to decide whether they will cut their losses and leave, or stay and try to break up the impending nuptials.

If you're a fan of upper-crust New England intellectuals or one of them yourself, Ceremony is probably your perfect movie, as the film exudes the same literate self-awareness as The Royal Tenenbaums or The Squid and the Whale, much less Woody Allen's salutes to the Big Apple. And truth be told, it's precisely in this seeming familiarity that the film falters; while there's certainly no dearth of Midwestern oddballs in low-rent jobs looking for love or Hollywood pups aspiring to find romance and a film career, the New York milieu is exhaustively well-explored. But Winkler puts a distinctive stamp on his particular story, not simply offering his characters the realization of their hopes and dreams, but the realization that some of those hopes and dreams aren't quite within their reach-at least, not yet.

Despite their difference in age—Angarano's 22, Thurman's 41—Sam and Zoe are actually well-suited for one another, and Winkler highlights the effortless chemistry the two share despite the more obvious obstacles standing in their way. But that gap in maturity is also fundamental to what makes the film work: the way they each indulge their romantic fantasies ultimately contradicts the other's, and their mutual acknowledgment of who they are, what they are, and where they are in their lives is effectively bittersweet. At Zoe's age, romantic fantasies are a distraction, even if they're a welcome distraction, while Sam's are a full-time occupation, and they obscure a lot of harsh truths that make the realization of those fantasies impossible.

Angarano's spent the better part of the last decade trying to live up to the promise of getting an early big break in Cameron Crowe's Almost Famous, but with turns like this one, the young actor really seems to be coming into his own; initially unrecognizable behind a moustache and as shaggily charming as Dustin Hoffman's Ratso Rizzo, Ceremony highlights his maturing appeal. Meanwhile, as his unwitting accomplice, Thompson exudes convincing exasperation as Marshall - but after this and Rocket Science, the slender actor should beware of any more insecure stringbeans lest he become typecast before fully exploring his talents. But while Thurman conveys scatter-brained sensuality just about better than anyone, Lee Pace proves to be the film's unexpected hero, both embracing Whit's thankless, self-aggrandizing douchebaggery and showing that his character's sincerity lies in acknowledging who and what he is, in short embodying the lesson yet unlearned by Sam, Marshall and Zoe.

Ceremony isn't spectacularly original, but it's a proficient breakthrough that manages to make its familiarity charming. Moreover, it's the kind of film that people should see in theaters with a group of like-minded cinephiles, who like the lucky few who caught, say, Bottle Rocket or Kicking and Screaming during their original theatrical runs will thrill at the prospect of saying "I liked him when." But whether Winkler amasses an immediate fan base or it takes him a few years to find a significant following, ironically, it's best if he not take his own film's lesson too close to heart. Because in all matters but love, the key to accomplishing great things is ignoring your limitations—and with Ceremony, Winkler sets his own bar incredibly high.