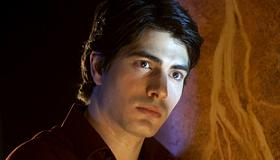 In the future, filmmakers will once again produce fun, entertaining and original films about vampires, werewolves and zombies. But until then, Dylan Dog: Dead of Night argues for a moratorium on movies about these three terrible creatures. Kevin Munroe, who resuscitated the Teenage Mutant Ninja Turtles for the 2007 cartoon TMNT, makes a shaky transition to live-action with this horror/comedy/noir hybrid about a private investigator trying to broker peace between the living, the dead and the undead. Expect box office receipts to be nominal, particularly given its arrival at the start of summer movie season, and to carry on being underwhelming on DVD/Blu-ray except as a cult title for slaves of the supernatural.

Brandon Routh plays Dylan Dog, a New Orleans-based private investigator who retired from investigating supernatural crimes after his ex-girlfriend's death and now subsists-barely-on cases about insurance fraud or cheating spouses. When a young woman named Elizabeth (Anita Briem) solicits him to uncover the identity of her father's furry, fanged killer, Dylan refuses the case. But before long, he and his partner Marcus (Sam Huntington) unwittingly find themselves caught in the middle of a turf war between vampires and werewolves. At stake is, oh, just the trifling matter of the fate of the entire human race—not to mention Elizabeth's safety, which the smitten Dylan is determined to protect.

Based on the long-running Italian comic book of the same name, Dylan Dog feels like its ideas were stolen from western entertainment—a mash-up of sexy vampires, burly werewolves, and comical-gross zombies-which Hollywood then stole back from the Europeans, forgetting that other movies have explored that evil terrain thoroughly, exhaustively and better. However, that may explain why no one in the film seems remotely shocked to discover that these creatures exist in real life, or shocked by anything, for that matter. Beyond Dylan's nonchalant revelations about these various supernatural cultures, the film seems less impressed with revealing hidden "truths" than using those truths to set up a constant series of glib, cartoonish payoffs. At the same time, Munroe and his screenwriters Thomas Dean Donnelly and Joshua Oppenheimer seem entirely unable to elevate the film's noir-style voiceover-or really any of the dialogue at all-above a stream of numbing, repetitive exposition.

If there's one quality that Dylan Dog most needs (other than a name change to something less stupid), it's world-weariness, a hundred-yard stare that hides a wealth of pain. Unfortunately, it's precisely this quality which Brandon Routh lacks. I was a big fan of the actor in Bryan Singer's Superman Returns; he brought a bland earnestness (not necessarily an insult) whose sincerity did what it could to make the big budget movie connect. But without gravitas, his gumshoe feels like play-acting. To be fair, Munroe never gives Routh, or any of the movie's "big" dramatic moments, any opportunity to resonate. Dylan's few raw confessions are forgotten as fast as they're revealed; there are no emotional stakes to the story, and the dimensions of the characters-humans and monsters alike-are so cartoonish that there's never any reason to care whether or not they live or die. An important death late in the film gets less than two seconds consideration, as Munroe busies himself with a brisk montage.

Never having read the original comic book, I can't say for certain if these problems were created while adapting it for the screen. But Dylan Dog creator Tiziano Sclavi also wrote the novel that inspired Michele Soavi's Cemetery Man, and that film has a much more successful balance between horror and comedy—and a sense of surrealism that this material desperately needs. As it plays here, Munroe's adaptation of Sclavi's work feels like is a cheap cash-in, a lazily-assembled greatest-hits collection of horror iconography stitched together with little depth, less purpose, and almost no entertainment value. While they're reconsidering Dylan Dog: Dead of Night's name, allow me to suggest another: Dylan Dog: Dead on Arrival.