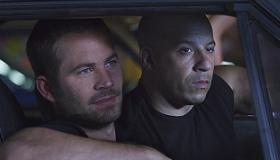 Summer roars to a start with Fast Five, which features some of the most exhilarating action sequences the screen has seen in years. It's the best one yet in Universal's testosterone-driven franchise, a series that ignited ten years ago with The Fast and the Furious and has sped on to four sequels. Vin Diesel, Paul Walker and new addition Dwayne Johnson are all rockin' and relocated to Rio to fight drug lords and elude the FBI, a change of direction that gives the series more energy and greater ambition. With its Australian opening this week already reaping smash numbers, expect Fast Five to run up a blockbuster worldwide box office and fuel several more sequels.

Picking up where 2009's Fast And Furious left off, Brian (Walker) and Mia (Jordana Brewster) spring Dominic (Diesel) from his 25 year prison sentence by forcing an accident with the bus in which he is being transferred. The gang speeds off to Brazil on another assignment set up by their comrade-in-chaos Vince (a very effective Matt Schulze). In service of one of the most exciting stunts in the series' history, third time Fast director Justin Lin stages a remarkable set piece around a superfast train shuttling souped-up stolen cars under the watch of the DEA. And the owner of the cars, Brazilian drug lord Reyes (Joaquim de Almeida), is also in peril of losing a key computer chip that opens a window on Rio's entire underground drug trafficking world. When it falls into the wrong (or right) hands, the crew, the gang, FBI agent Hobbs (Johnson) and local cop Elena (Elsa Pataky) are in a race to find a bank vault containing over $100 million. Putting together a team in pure Mission Impossible fashion, the movie rises to its most complex set piece—the heist. As the plot thickens with gunfire, chases and fights, an interesting dynamic between Diesel and Johnson emerges with a man-on-man smack down that's pure macho magic. Who says there's no good action stars anymore? Stay tuned when the credits roll for a scene setting up Fast Six, which features a "ghost" of series' past.

Production elements are top notch, especially those from cinematographer Stephen F. Windon and the three person editing team. Walker is fine but the show really belongs to Diesel and new cast member Johnson. Brewster is terrific among a team of all aces, including familiar faces Chris ‘Ludacris' Bridges, Tyrese Gibson, Sung Kang and Gal Gadot.

As one character says, "Forget Mission: Impossible, this is freaking mission insanity!" But with Lin, screenwriter Chris Morgan and the crack cast motoring at full speed, Fast Five is a hard-driving, adrenaline-pumping blast that leaves everything else in its dust.