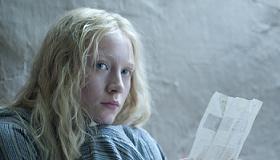 A spiritual sequel to Lone Wolf and Cub, Joe Wright's Hanna introduces its titular cub in her teens, and trained to the nines. Saoirse Ronan plays Hanna with a mix of fierceness and fragility and the actress is as visually compelling as her character is conceptually intriguing; the same can be said of the film as a whole. Directing with the gritty acrobatics of Atonement's Dunkirk sequence, Wright adapts to action impeccably, and uses scenes of combat to express different motivations in the stoic heroine—approbation, respect, protection, contrition—but all the while maintaining a spy-like cool, effectively supported by The Chemical Brothers' electronic score. Box office should be good for this thriller as it will appeal to cineastes and action fans alike. With additional bells and whistles (D-Box presentation, for example) Hanna's success could come from more than just unique DNA.

In the film's opening sequence, Hanna kills a reindeer with a bow and arrow. After a hard and fast hunt she impassively offers it a factually accurate version of Last Rights, "I just missed your heart," she says, as if declaring the animal's integrity as it dies. This is the sort of allegorical phrase at home in fairy tales, and Hanna certainly aims to be that. Hanna lives in a nameless sea of snow and prey (Wright shot in Finland) and it's more than home: it's a boot camp and a safe harbor from Hanna's wicked witch, Marissa Weigler (Cate Blanchett). Erik (a perfect Eric Bana) has been hiding this exceptional girl in plain sight since Weigler violently ended a government experiment to which Hanna was subject. Now, Hanna has to break free of her bud—and a less swaddling-like bud you'd be hard-pressed to find. Erik gave his civilized life to raise her, and like any gesture of independence, Hanna's lunge toward autonomy resembles rejection and ingratitude. His later admission "kids gotta grow up" could break the heart of any parent. Hanna's adventures outside the confines of their Finnish bivouac are beset with survival-mode murders, until she meets a "normal" British family on holiday. The family's adolescent daughter, Sophie (Jessica Bardem), has purely superficial interests and couldn't be less like Hanna, but they bond, and juxtaposed the girls are emotional blank slates: Hanna's spent her life absorbing survival skill and Sophie's absorbed celebrity culture; their orientations to the world are similarly gruesome and tender. Still, unless the character knows her from an FBI file, everyone sees in Hanna the capacity to bring them back to something basic; she has a goddess stature, even at the age of 16.

Much has been made of how Hanna stacks up against her ass-kicking sisters. Wright himself characterizes Hanna as an antidote to the fake fempowerment of films like Sucker Punch. This film is peculiar, appealing, perhaps timeless as a result of the way it side-steps the issue of Hanna's sex. However, gender dynamics stand in relief when she's pitted against the film's mother figures: Olivia Williams plays Sophie's mother as a relic of faded feminist politics, while Blanchett's Wiegler approaches Hanna with a gun and misplaced sense of maternal warmth. Hanna's motherless-ness is answered at every possible call. On the flip side, her moments of security are those under the protection of father figures (Erik or Knepfler, played by Martin Wuttke), suggesting the world is cruel to girls—which is what makes them such good fairy tale heroines. It's ironic, against a fairy tale house in a defunct amusement park, that the color and warmth Hanna couldn't have known as a child surround her as she destroys the identity she was born to. Yeah...kids gotta grow up.

The Chemical Brothers' score stealthily intermingles its electronic din and thud with the film's organic percussive sounds; the result camouflages the origin of some noises, underscoring (pun intended) camouflage as a theme. This is a universe ruled by clear directives and obscured origin points. As Hanna hunts her reindeer in the woods we pan and dissolve between hunter and prey, both grey and white amidst a surrounding grey and white world. These washed out visuals reflect the uncertainty of our heroine's origin and identity. It's such a deeply realized coming of age, frightening for parent as child alike, and also strangely sweet.