close
Three pigs, two witches and a wolf who's no team player

Hoodwinked Too! Hood vs. Evil 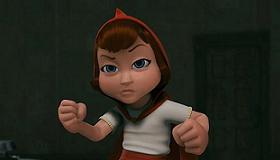 Quick as a flash and just as substantial, the sequel to 2005's Hoodwinked aims to one-up the fairy tale universe and cultural references of Shrek in one go. Voiced by TV heroine Hayden Panettiere, this version of Red Riding Hood is spunkier than Amanda Seyfried's in Catherine Hardwicke's moody recent revamp-and she's far more skilled in mixed martial arts. Like the bright, but forgettable 3D animation, Panettiere's performance has the straightforwardness of a jumbo crayon. Patrick Warburton plays the Wolf in sheep's clothing (make that a Members Only jacket) and David Ogden Stiers is the smooth frog boss of the Happily Ever After organization (a.k.a. HEA)give us a better reason to keep watching. Box office will be unimpressive as the film is made for disposability-in one theater, out the window for fast DVD dollars.

A quick storybook style intro explains the first film: Red (Panettiere) saved Granny (Glenn Close) from the Hannibal-like Boingo the Bunny (Andy Dick), who has since been institutionalized. Since the last episode, Wolf (Warburton) has been working for HEA, this universe's answer to the FBI, and Red has been training at a monastery on a mountain (a la Crouching Tiger, Hidden Dragon). Her education is in equal parts cookies and kung-fu (we can call it her "Year of Baking Dangerously"), and like any recipe, a certain amount of predictability is required to make the cake rise. Back at the HEA, Granny stops an evil witch (Joan Cusack) from baking young plumps Hansel (Bill Hader) and Gretel (Amy Poehler) into a pie, and gets herself granny-napped in the process. Red has to leave the reservation, re-team with the unteamable Wolf and earn her gra-MMA black belt before the wicked baking witch uses her know-how to rule the fable-focused world.

Of course, kid flicks have to lure parents into buying tickets, and this is where Hoodwinked Too!, like Shrek before it, loses direction with rapid-fire sitcom jokes that are sprayed so indiscriminately around the plot that the film's principle kid demo is left confused. The pre-teen kids who could follow would likely be put-off by something so obviously geared toward younger audiences. I don't envy the marketing department: the film has plenty of great key scenes and the set pieces are efficiently and often cleverly directed by Mike Disa but, in the broad view, this storybook adventure is a few cookies shy of a picnic basket.