close
In this world, sex has a “sell-by” date 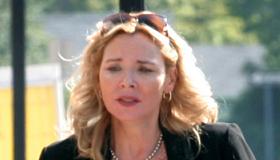 The prospect of Sex and the City's Kim Cattrall shedding her glamorous image to play an aging adult film star and single mom must be one of the main attractions of Keith Bearden's smart comedy Meet Monica Velour. She's surely excellent in it and performs well alongside geeky newcomer Dustin Ingram who plays her obsessed teen fan. It possesses loads of crossover appeal.

Cattrall embraces her 49-year-old character with open arms and gives a fine performance full of strength, vulnerability and also sexual chemistry. Newcomer Dustin Ingram plays Tobe, a gauche 18-year-old whose obsession with Monica leads him to her lair just as she is about give a rare comeback appearance at an Indiana strip club. The combination of naivety confronted with world-weary experience makes for an attractive pairing, as the stripper and the youngster embark on an unlikely friendship. As she's trying to gain custody of her daughter from an estranged ex-partner, Tobe tries to convince her that he could be a suitable man for her.

Up to this point, Tobe has been stuck in Washington, living with his grandfather (Brian Dennehy in rambunctious form), selling hotdogs and hanging out with his 12-year-old neighbor (Daniel Yelsky). Instead of pushing Tobe over the edge and making him a caricature, Ingram reins him in and makes his obsession believable and appealing. He heads off to meet his renegade muse, driving the vintage hot dog truck he hopes to sell when he reaches her. When he finds that the woman of his dreams is rather different in reality (raddled, divorce and desperate for money) he is undeterred. Whether or not their relationship will develop is left open by the film, which adds to its intrigue and originality.

Cattrall provides a formidable tour de force as the woman who has slipped to the bottom of the pile. Both emotionally charged and at times extremely funny, with humor emerging naturally from the characters' predicaments, Meet Monica Velour has the feel-good factor without comprising its ideals.