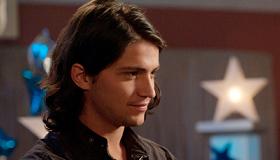 A surprise for those expecting a watered-down High School Musical, Prom is a highly entertaining original movie that's funny, touching and real. The story of a group of kids surmounting the ordeal of the Best Night of Their Lives, this PG affair is a perfect family film that will benefit from word of mouth. High schoolers are the obvious target audience, but the picture could capture nostalgic adults as well, if Disney's lucky. Box office should be decent if it can withstand intense early summer competition and hang in theaters long enough to fill its dance card.

With 14 characters to follow, you need a scorecard to keep them straight. Prom has the feel of American Graffiti (if not that film's edge) and emphasizes the disparate types found in every school. Don't expect coked-out kids or gangs, Prom is interested in the ideal—not the reality—but within that Disney fantasy are recognizable and engaging characters. Central to them all is Nova Prescott (Aimee Teegarden), the honors student who heads up the Prom Committee and obsesses over the decorations—they rival the set for a major movie. She's teamed up with bad boy Jesse Richter (Thomas McDonnell), a rebel sentenced by the principal to prom preparations. After the guy she thinks she wants (Jonathan Keltz) stands her up, a slow-brewing attraction simmers between opposites Nova and Jesse, with complications aplenty.

Director Joe Nussbaum deftly weaves all these kids into the action with style and never dumbs-down the material. Unlike most films of its ilk, Prom is genuinely human and relatable, veering with ease between comedy and drama. The talented kids in the cast are all well-cast with standouts including the lovely Teegarden and Johnny Depp-lookalike McDonnell, who anchor the proceedings. Adults are minimally included but as Nova's over-protective dad, Dean Norris has a few nice moments.

When the streamers come down and the lights come up, we've all had great date night at the movies. Pass the punch.