close
Blame it on Rio 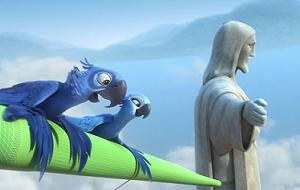 Another winner from Blue Sky Studios, creators of Ice Age, Rio flies high on comedy, heart and great music. The story centers around a domesticated Macaw flown (by plane) to Brazil, bird-napped, and then set loose on a South American adventure. It's perfect family fodder with a sterling voice cast, and a promotional tie-in with the Angry Birds video game should guarantee giant box office numbers.

Blu (Jesse Eisenberg), a domesticated Macaw, lives in pampered comfort with owner and Minnesota native Linda (Leslie Mann). Their sweet existence is threatened when a Brazilian named Tulio (Rodrigo Santoro) explains that Blu may be the last male bird of his kind and that it's imperative he comes to an Ornithology lab in Brazil to mate with Jewel (Anne Hathaway), a feisty female Macaw. But Blu has never learned how to fly, which makes him a bit out of sorts when he must "romance" Jewel. (Awkward!) In short order, they're caught by a group of no-good thieves and guarded by an evil, nutcase cockatoo, Nigel (hilariously voiced by Jemaine Clement). Problema grande! To escape, Blu hasto use alternate transportation to travel—or finally learn to use those wings. From this point the chase is on and the feathery pair find themselves mixed up in all sorts of wild times.

Director Carlos Saldanha has crafted a gorgeous cartoon with superb use of 3D. The colorful splendors of carnival time in Rio keep the picture much brighter than average 3D efforts, even with those pesky dark glasses. The wide screen wonders of the exotic locations are beautifully captured, but most importantly screenwriter Don Rhymer has scripted an engaging and funny story with vivid characters, and Rio's all-pro voice cast really delivers the goods. Eisenberg's nervous readings are perfect for Blu, while Hathaway's sweetness and pluck makes for great chemistry between them. Jamie Foxx as a canary, will.i.am as a cardinal, George Lopez as a toucan and Tracy Morgan as a bulldog stand out in musical and comedy bits. Music and the sounds of Brazil play a big part in the proceedings with a sensational soundtrack including a beautiful original tune, "Fly Love," belted by Foxx and will.i.am (both platinum-selling singers beyond the ink and paint), plus a mix of samba standards from the great Sergio Mendes.