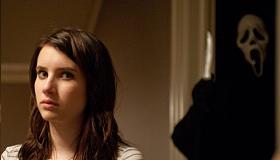 If there was ever a horror film that made genre fans feel old, it’s Scream 4. Wes Craven, himself an auteur whose glory days are behind him, joins screenwriter Kevin Williamson to resuscitate the film series that gave both of them their last big screen hit 11 years ago. Continuing to follow the exploits of Sidney Prescott (Neve Campbell) and the masked killer who, like the franchise, refuses to die, it's derivative, uninspired and painfully unconfident about its ability to scare audiences without the help of a phalanx of foley artists. Scream 4 seems unlikely to draw in older fans of the original trilogy, but should do well with a fresh crop of teens.

Ten years after the events of Scream 3, Sidney Prescott returns to her hometown of Woodsboro, California, to promote the self-help book she wrote to come to terms with fending off the Ghostface killer. Unfortunately, to commemorate her arrival, two of the town’s teens fall prey to a Ghostface-style slasher, plunging Woodsboro into another murder mystery—and this time, Sidney's a suspect. Meanwhile, reporter-turned-novelist Gale Weathers (Courteney Cox) struggles to follow up the success of Stab, her best-selling account of the original murders, and thrills at the prospect of a new news story, not the least of which because her husband Dewey (David Arquette), now chief of police, can get her exclusive access to evidence. Simultaneously, Sidney’s niece Jill (Emma Roberts) and her friends, including her ex-boyfriend Trevor (Nico Tortorella) and closeted horror geek Kirby (Hayden Panettiere), try to piece together clues about the mystery while trying to avoid falling prey to Ghostface’s blade.

But these are teens: they'd rather dismiss the murders and celebrate the kill-aversary with a Stab marathon screening of the films inspired by the book inspired by the murders. Struggling to maintain control of her life as the killer decimates the people she loves, Sidney rallies for one last showdown with Ghostface in order to protect her family and friends, and hopefully put her past behind her for good. (No, really, we hope so too.)

There's pantheon of self-conscious, post-modern screenwriters who became successful in the wake of Quentin Tarantino. Of them, Scream 4's Kevin Williamson is the most transparent, and least poetic: he overshadows every one of his ideas with dialogue commenting on said idea's goodness or badness. Even the film’s opening, a brilliant bit of meta-textual fun that takes audiences through a carnival ride of horror realities before it arrives at the “actual” story, undermines its own effectiveness by forcing the characters to talk endlessly about horror clichés and movie conventions. By the time you get to Sidney’s story, you barely care—Williamson spends so much time constructing frameworks of references and influences that the actual plot inside is instantly stale.

That said, it’s precisely the meta-textual aspect of the film that gives it promise, even as it fumbles the delivery. As its main character, Sidney is a young woman who has come to be identified by the Woodsboro murders, and Campbell is returning to the role that made her famous (and which remains her biggest success by a wide margin). As her niece, Emma Roberts’ character Jill can relate to the challenge of trying to make a name for herself in the shadow of a famous aunt (in the actress’ case, Julia Roberts). And even Craven, whose efforts to launch new film series or venture have repeatedly failed, seems in some way to be coming to terms with his unfortunate lot, which is that audiences (not to mention studios) want proven entities, and is thusly delivering a factory-assembled crowd-pleaser that has nothing more to say than, “Please buy tickets to see me.”

Pity that Craven’s ability to render heart-stopping sequences is either lost or away on vacation; there’s not a single scene in Scream 4 that approaches the suspense he mines in the iconic opening of the first Scream, and the kills themselves are uninspired stabbings, augmented by extremely loud stabs (no pun intended—okay, okay, pun intended) from the score. Early rumors said the film would take on horror films from the last decade, an added disappointment as it name-checks torture porn and J-horror, but never works them into Ghostface’s imagination. Although one character is eventually tortured, the scene plays more like a reference to the opening of the original Scream than any of the Saw films, and the remainder of the deaths are scarcely frightening (or gory) enough to be memorable.

The sad thing is that audiences are still completely receptive to alternative horror films, which in this case really qualifies as “classic” horror: teenagers wander around in the dark and are picked off by a crazy, questionably-motivated person with a weapon and a memorable mask. The success of filmmakers like Ti West and Oren Peli demonstrates that you don’t need loud, jarring noises to create suspense and an audience response, but Craven—once on the forefront of horror—is now in the past, hammering home each murder without subtlety or creativity. And although the eventual identity and motives of Scream 4’s Ghostface are about as clever as those of the killers in the previous films, between Williamson and Craven the film rapidly disintegrates in a mess of stillborn suspense and improvisation that, quite frankly, is irreparable both logically and dramatically.

If there’s a bright spot , it’s in the performances, particularly Roberts and Panettiere. The script doesn’t give us enough credit to give them genuine intelligence, but the two actresses maximize the potential of their characters and manage to make them compelling. But the bottom line is that the film should still do sizable box office precisely because its target audience—kids who are the same age now my generation was when the original was released in 1996—is either unfamiliar with or uninterested in the actual execution of its pseudo-subversive ideas, and will thrill at the clockwork jump scares and a set-up that defines the difference between clever and smart. Even if you absolutely love the original trilogy, Scream 4 is confirmation that they just don’t make them like they used to—and that goes for horror fans as much as the films themselves.