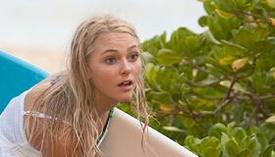 Sappy melodrama, clumsy dialogue and heavy-handed proselytizing derail the inspirational story of teen surfer Bethany Hamilton (AnnaSophia Robb) who survived a vicious shark attack in 2003 but lost her left arm in the ordeal. Bethany continues to be a pro surfer thanks to determination, intense training and deep-rooted faith. While her story is ready made for a big-screen drama like Soul Surfer, director Sean McNamara and a committee of scriptwriters including Baywatch alums Douglas Schwartz, Deborah Schwartz and Michael Berk fumble their golden opportunity to make a faith-based family drama with legitimate crossover appeal. Most faith-based releases are limited releases but fledgling distributor FilmDistrict is taking Soul Surfer wide at a risky 2,100 screens. Group sales and grassroots support from faith-based communities like Fellowship of Christian Athletes will help draw audiences who feel a strong connection to Bethany's story. Meanwhile, Soul Surfer remains surprisingly flat on the Boxoffice Twitter Webwatch and claims less than 15K fans on Facebook in the days heading up to its opening weekend. Poor reviews will dampen Soul Surfer's chances at sizable business outside its Christian fan base.

The always-likable AnnaSophia Robb (Race To Witch Mountain) is earnest as the pretty blonde teen and handles her one-armed handicap believably thanks to excellent CGI work from L.A.-based effects house Engine Room. Robb, with her warm smile and spirited determination, makes Bethany the type of young hero you want to cheer for, but poor storytelling from an army of scriptwriters undermines her lead performance.

Helen Hunt and Dennis Quaid play off each other perfectly as Bethany's supportive parents Cheri and Tom Hamilton.

Perhaps Sean McNamara, a veteran director of popular kids comedy series like Even Stevens, That's So Raven, Jonas and Sonny with a Chance, is out of his depths when it comes to teen melodrama. Outside of the surfing footage, the best scenes throughout Soul Surfer are the everyday moments, like Bethany and Alana sneaking off to join friends for Full Moon surfing or Bethany learning how to make a sandwich with only one arm. Still, Soul Surfer comes up empty when compared to the beautiful 2007 short documentary Heart of a Soul Surfer, which does a better job telling Bethany's story.

Soul Surfer is tense but McNamara fails to capture the drama around the pivotal shark stack. What McNamara offers Soul SurferÕs audiences is a silly dream sequence of Bethany surfing towards a blinding light while her life hangs in the balance. It tempts one to scream—"Don't surf towards the light!Ó—which I don't think is the impact McNamara had in mind.