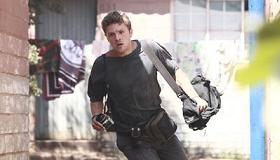 The horror is all around the young photojournalists of The Bang Bang Club, a tense and satisfying political drama from writer/director Steven Silver and based on Joao Silva and Greg Marinovich's 2001 book of the same name. After its premiere at the 2010 Toronto International Film Festival, Tribeca Film, the newly formed distribution division of Tribeca Enterprises, plans a late April release. Movies dealing with Apartheid-era South Africa, whether large-scale studio films like Invictus or arthouse releases like Tsotsi, regularly fail to meet theatrical expectations. It's as if the topic is too uncomfortable for even the more discriminating moviegoers. While Silver makes great use of his attractive leads Ryan Phillippe and Malin Akerman, as well as the film's many tense action scenes, expect modest earnings relative to the film's limited platform release. Still, The Bang Bang Club is a solid dramatic debut from Silver, who comes from a documentary background, and hopefully the first of many dramatic features for the South African native.

It is the final months of apartheid and South Africa is in a state of tribal unrest as President F.W. de Klerk's supporters work to make the African National Congress appear weak and ineffectual. Four young, white photojournalists Greg Marinovich (Ryan Phillippe), Kevin Carter (Taylor Kitsch), Ken Oosterbroek (Frank Rautenbach) and Joao Silva (Neels Van Jaarsveld), set out to capture the violent story and show the world what South Africa is experiencing. Their photos start to appear in newspapers and magazines internationally, but politics develop a new meaning for these photographers, as black South Africans begin to resent them for gaining fame for photos of the nation's suffering.

Some people remember that Greg Marinovich and Kevin Carter won Pulitzer Prizes for their photojournalism, but Silver's film reveals the human stories behind their experiences in South Africa.

Silver comes from a documentary background (The Last Just Man, The Diameter of a Bomb, Gerrie & Louise) and his expertise with true stories is clear in the tense and often suspenseful Bang Bang Club. He also makes great use of his experiences as a student activist and member of the United Democratic Front. Bang Bang Club feels honest in its depiction of politics.

Editor Ron Sanders (Coraline, A History of Violence) maintains a fast pace throughout the film. Production designer Emelia Weavind (Cry, the Beloved Country, Sarafina) captures the dark rooms and light tables of the pre-digital photography world. Cameraman Miroslaw Baszak (Pontypool) makes the most of the dusty streets and the shantytowns in the townships of Soweto and Thokoza.

Malin Akerman (The Romantics, HappyThankYouMorePlease) brings some welcome sex appeal as the supportive photo editor Robin Comley. Ryan Phillippe stands tall as Marinovich, a photographer committed to capturing the truth and convinced that a good photo can save the world.

While Phillippe and Akerman are the film's marquee players, it's Taylor Kitsch (TV's Friday Night Lights and star of the upcoming John Carter of Mars) who gives the standout performance as troubled photographer Kevin Carter. As Carter, Kitsch captures the emotional toll these photographers experience and how it's impossible to wipe away all the violence one sees no matter how professional you may be.