close
From a lesser-read page in the history books 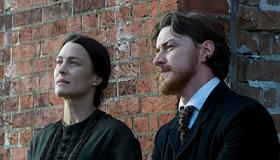 A thriller that's riveting from start to finish, Robert Redford's courtroom drama The Conspirator details the crime and trial of the seven men and one woman charged in the conspiracy to kill Abraham Lincoln. Redford has crafted a revealing look at a key chapter in our nation's history that you only thought you knew. The debut film from The American Film Company, a new group specializing in films about American history, this could gain some box office interest from older audiences on the strength of Redford's name, but subject matter and deliberate pace might keep the younger crowd away. Nevertheless, this handsome period piece should develop a strong afterlife on DVD and in schools.

Historical dramas are never easy sells, so Redford should be commended for taking on this compelling but little known story, set against the backdrop of post-Civil War Washington. The crux of the film is the trial of seven men and Mary Surratt (Robin Wright), all charged with conspiring to assassinate President Lincoln, Vice President Andrew Johnson and Secretary of State Edwin M. Stanton (Kevin Kline). The film gains most of its strength depicting the relationship between Surratt and Frederick Aiken (James McAvoy), a Union war-hero and new lawyer who reluctantly becomes her defender before a very biased military tribunal. Surratt owned the boarding house where John Wilkes Booth and others, including her son John (Johnny Simmons), met to firm up their plans. Despite his initial doubts, Aiken slowly suspects she may be set up as bait because her son was the only suspect to evade the manhunt. The film's most affecting facet is the mother/surrogate son relationship that emerges between this pair as Aiken desperately takes measures to save Surrat's life. When Johnson and Stanton use the court of public opinion against the defendant, the politics of the time see some criticism and the tenuous peace pact between North and South helps contextualize the nation's post-War tension.

Some may write this all off as fodder for the History Channel, but Redford, who has often taken an interest in the intriguing stories behind real life scandals (Quiz Show, All The President's Men) keeps the story engrossing and on target. Despite widespread media coverage during the time of the trial, the story feels fresh because of its perplexingly minor role in the history books. The cast is all-pro, with McAvoy expertly playing the reluctant legal eagle who gradually finds humanity after the rush to judgment. Wright beautifully and subtly underplays Surratt, displaying strength and dignity in very trying circumstances. Among the large cast, Kline is fine as the oily Stanton and other standouts include Tom Wilkinson as Reverdy Johnson and Evan Rachel Wood as Surratt's daughter, Anna.