close
An old-fashioned epic fails to live up to its own obvious goals. 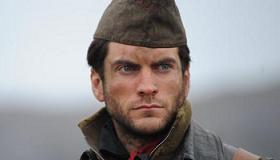 Roland Joffé's There Be Dragons is clearly intended as grand narrative filmmaking in the classical tradition of Hollywood's great epics, the kind of immersive, cast-of-thousands David Lean-esque spectacle they just don't make anymore. The gap between the writer-director's obvious ambition and actual execution is almost moving: from its baldly overwritten dialogue to its claustrophobically stingy use of locations, Dragons is underdone in every way. This tale of two childhood friends turned enemies—Catholic priest Josemaria Escriva (Charlie Cox) and Fascist jerk Manolo Torres (Wes Bentley)—aims to target Catholic audiences with its portrait of Escriva, canonized as a saint in 2002, but neither religious audiences nor those looking for an old fashioned saga will be satisfied. Commercial prospects are meager for this laughably bad film.

There Be Dragons largely unfolds in flashback, as journalist Robert Torres (Dougray Scott) comes to Madrid in the 1980s to investigate Escriva's life. Dad Manolo, he knows, was in seminary briefly with the saint, but father and son haven't spoken in eight years. Arriving in Madrid, Robert calls his dad. "Dad? It's me, Robert, your son," he says. This is the kind of massive redundancy and awkward exposition in which Dragons traffics.

Escriva grows up poor but loved, while sour-faced Manolo's tyrannical dad teaches him the importance of treating factory workers with plutocratic disdain. After a bucolic childhood, their friendship goes south when, during a chocolate factory taste test, Escriva's taste buds prove more sensitive. Jealous of his more gifted friend and angry after his factory owner father dies during a workers' strike, Manolo becomes a fascist spy. Meanwhile, Escriva continues ministering to the Spanish people in times of great danger.

Despite its appeal to devout audiences, There Be Dragons tells viewers nothing important about Escriva's specific religious views, briefly hinting at his interest in self-mortification but otherwise confining him to liberal bromides about love, patience and non-violence. This may avoid discussing the controversies surrounding Escriva's life and his Opus Dei organization, but it does nothing for drama. On the subject of the Spanish Civil War, the film's even more weak-willed and evasive. Openly siding with the Fascists is out of the question, of course, but the film is equally unwilling to grant the rebels any sympathy; hence, perhaps, the curious depiction of brave countryside rebels (fighting fascists) but the depiction of their urban equivalents as concerned solely with the persecution of priests. The only suggestion of a situation slightly more complicated than Fascism vs. a unified Marxist front is a single line ("Those damned Communists in Madrid have hung us out to dry.") hinting at the various factional disagreements that hindered anti-Franco fighting.

The absurdly reductive narrative aside—mild-mannered priest vs. cartoonishly scowling fascist—complaints must also be lodged against the film's claustrophobic feel. The film's lack of true historical scope is compounded by its clearly confined locations: the "epic" battle scenes always seem to take place in the same few courtyards and anonymous country fields.

There is, finally, the fact that some of the writing is just unbelievably bad and reductive, including the closing credits crawl ("as for Manolo Torres, some say he still struggles in that part of men's souls where...There Be Dragons") but also extending to the dialogue. Performances are uniformly cartoonish, not least from Bentley, who can't even throw his dinner bowl on the ground without seeming unnecessarily exaggerated. The framing story is even more frustrating: the more Robert learns about his dad, the less he wants to do with him. A reasonable reaction, one might think, but his infinitely condescending fiancé (Golshifteh Farahani) responds to his anger with a series of eyebrow-raisings and sighed "Oh, Robert"s, while reminding Robert that it's important to get over anger with his father so that they can have kids.