close
Lions and tigers and bullies—oh my! 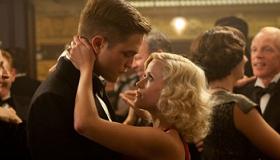 Christoph Waltz played an ebullient psychopath for Quentin Tarantino so well that it won him an Oscar and typecasting. He played buoyant and evil in this winter's The Green Hornet; will do so again as the dastardly Cardinal Richelieu in this winter's The Three Musketeers. And now he's the effervescently sinister circus boss who squares off against Robert Pattinson's gallant veterinarian in this adaptation of Sara Gruen's bestseller. Talk about your inglourious basterd. But it makes sense: Waltz is the highlight of this glossy but plodding drama, a live wire in a movie that sorely needs a jolt. Despite its shortcomings, fans of the book and fans of Pattinson and costar Reese Witherspoon-as well as romantics and melodrama addicts-should ensure robust box office grosses.

Like the novel, the movie is framed as an old man's memory, as nonagenarian Jacob (Hal Holbrook) recounts his time with the circus at the height of the Great Depression. Forced to drop out of Cornell veterinary school, happenstance leads young Jacob (Pattinson) to the Benzini Bros. troupe. Immediately into his tenure as menagerie vet, it's evident that this threadbare road show has problems. Under the direction of the charming but mercurial August (Waltz), the animals are fed a diet of rotten meat and the employees-a collection of performers, tent-erectors and colorful grunts-are thrown from the moving train when August can't make payroll. At another time Jacob might have walked away, but in 1931 jobs are scarce, and besides he likes the people, especially August's wife, animal trainer Marlena (Witherspoon). The pair grow closer as they bond over Rosie, the elephant August buys off a failing circus to serve as Marlena's new act-but their mutual crush doesn't escape the jealous August.

Gruen's novel was set apart was her meticulous research on the history of circuses. Translated to the screen by scriptwriter Richard LaGravenese (Freedom Writers, P.S. I Love You) and director Francis Lawrence (Constantine, I Am Legend) the detail is less specific and far less evocative. Still, the scenes of Jacob and Marlena training Rosie, and of Marlena performing with the pachyderm have a welcome electricity absent from the rest of the movie, and an friendly chemistry between Pattinson and Witherspoon is more convincing than their hot and heavy clinches.

Adding to the woes are James Newton Howard's overblown score and a climax that widely misses the mark. A scene that ought to be terrifying isn't, thanks to clunky effects that make the action look phony. Waltz is terrific. Witherspoon and Pattinson are fine, the latter proving he's something more than the Twilight series' pretty vampire. Thanks to excellent set design and art direction and Rodrigo Prieto's cinematography, Water for Elephants is a gorgeous production. But the love triangle takes a familiar shape and the dialogue tends toward the banal. Rarely has running away to join the circus looked so dull.