close
If only life were so sweet! 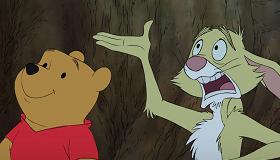 Disney has a long association with A.A. Milne's delightful characters, a herd of lively stuffed animals that has enchanted children and the young at heart for decades. Here the franchise uncovers two previously untouched stories from the original books and weaves in strands from five others. Don't count on special effects: it has been lovingly and traditionally animated to pay homage to E.H. Shepard's original drawings. The box office should be considerable and ancillaries even more promising.

John Cleese narrates with dulcet British tones and sets the mood in the opening in Christopher Robin's bedroom. The young Christopher (Jack Boulter) has fun with all his toy animals, we're assured, but his very favorite is Winnie the Pooh (Jim Cummings), the bear with little on his mind besides the next pot of honey.

Pooh wakes up one day to find that he is out of honey. When he's out searching for it he discovers Eeyore (Bud Luckey), who has lost his tail. Pooh and Eeyore ask Owl (Craig Ferguson) for help finding it and Christopher Robin holds a competition to find the dour donkey a new tail.

The filmmakers have avoided giving Pooh any CG-oomph to satiate the post-Shrek generation, and have opted instead to stick to the traditional, which invests a distinct whiff of nostalgia into every frame.

There is an adorable sequence in which Pooh, dressed in a bee-striped swimsuit and boater hat, dives into paradise: a landscape of his favorite golden liquid. All the while he sings, "Everything is Honey."

After 85 years consigned to the Hundred Acre Wood, Pooh thankfully displays no signs of aging or getting any wiser. Disney has the right attitude in revisiting the franchise every so often to introduce the gang to a whole new generation. At 73 minutes, it does feel as if we have been short-changed, but leaving your audience wanting more is hardly a bad thing.