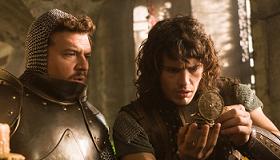 If scatological humor, endless dick jokes and profanity are all required for a comedy to work these days then Your Highness could be a smash hit. Unfortunately, the film itself has to be funny and Highness (Get it? Druggies?) is so thuddingly awful you won't crack a smile. This miserable, medieval inside-joke watches two princes journey to save a virgin before an evil wizard can deflower her. It fails so completely at its reach for lowness that you may find yourself crying out for Mel Brooks, Monty Python, hell even Cheech OR Chong to swoop in and save the thing. No such luck. Audiences will be limited to the least demanding ticket buyers and probably a lot of 13-year-old wannabe potheads who will sneak into this hard ‘R' mirthless-fest after paying to see Rango.

This misfire was conceived by star Danny McBride (and co-writer Ben Best) along with director David Gordon Green who both scored on the overrated stoner hit Pineapple Express, which was loud and overdone but was saved by gem of a comic turn by James Franco. Franco turns up again here, to lesser effect, as the suave Prince Fabious who constantly overshadows his ne'er do well brother Prince Thadeous (McBride). Adding insult to injury, Fabious has now won the heart of a beautiful virgin Belladonna (Zooey Deschanel) but suffers a case of wedding-interruptus when nefarious wizard Leezar (Justin Theroux) kidnaps the damsel to have his way with her. This does not go over with the King (Charles Dance) who forces the slacker Thadeous to help out little Bro and so off they go, joined by manservant Courtney (Rasmus Hardiker) to rescue Belladonna. Along the way there are several poorly staged battle sequences and lots of fairy tale encounters with devious naked nymphets, a well-endowed Minotaur and other attractions. Eventually joining them on their quest is a take-no-prisoners warrior Isabel (Natalie Portman) who has her own agenda and some pretty impressive moves.

Apparently Green, who cut his teeth on well-regarded indie dramas George Washington and All the Real Girls feels more like a farceur than chronicler of real lives-if his overbearing direction here is any indication. Green shows no skills with subtlety and neither does McBride so the combination is positively lethal. Every joke is punctuated and then beaten to death, so there are precious few genuine laughs in the entire 102-minute running time. The director has done no favors for his one-time college buddy McBride, who comes off as crass and smug throughout. The only performer who actually has a handle on his character is Theroux, who somehow manages some decent line readings. The less said about the humiliating turn from Toby Jones as the genitally-challenged Julie, the better. And after landing Oscar nominations (and in her case a win) Franco and Portman should be embarrassed to have this as their follow up, but both will survive as this thing will likely be in and out of theaters fast.